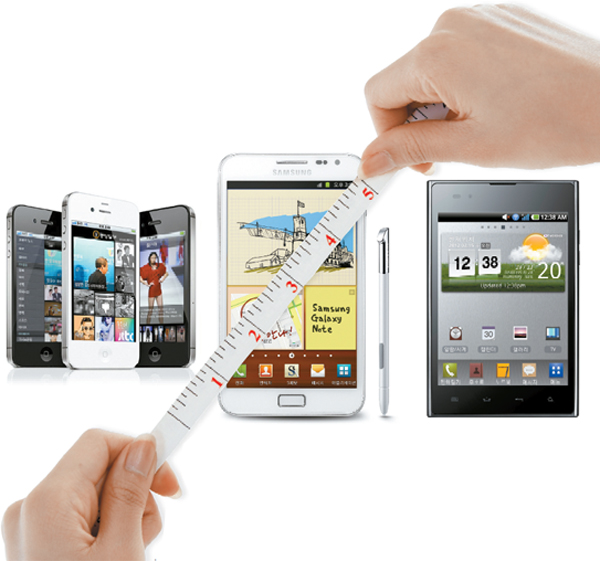 
It’s no longer unusual to see people on the subway making a call on a smartphone that covers half their faces. 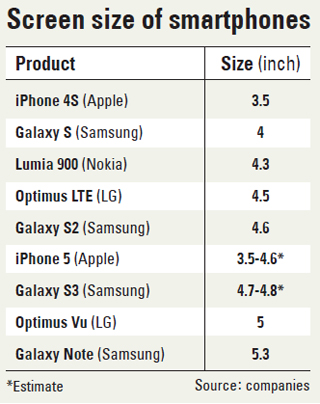 That’s because size has come to matter in the war for dominance in smartphones. And these days, bigger is better.

Led by Samsung Electronics’ Galaxy Note smartphone, which is less than six months old, the so-called “mini tablet smartphones” - sized in between ordinary phones and tablet PCs - has become popular in Korea.

The Galaxy Note, with its spacious 5.3-inch (13.5-centimeter) screen, has sold over five million units worldwide since its debut in October last year. Samsung’s domestic rival LG Electronics is hoping to capture some of that market by rolling out the 5-inch Optimus Vu on March 5.

The large-screen smartphones have disproven the long-held perception that smaller is smarter. Apple’s iPhone has had 3.5-inch screens in all versions since its debut in 2007.

Consumers find a 5-inch screen easier to use for the various multimedia content now available, which is getting more and more popular using the bullet-fast fourth-generation long-term evolution mobile connections now available. Some analysts think it will become the industry standard for smartphones.

“When the screen size grows, it becomes easier for display makers to improve resolution,” said Yeo Sang-duk, head of mobile/OLED department at LG Display last year. “We are sure the size of smartphones will continue growing.” A major global panel supplier, LG Display manufactures the retina screens for Apple’s iPhone 4.

“Young customers - men in particular - opt for the Galaxy Note or Optimus Vu to play games and watch videos,” he said. “Most of them chose iPhones as their first smartphone, but you know, not many are interested in the numerous functionalities and applications for it. Customers want simple and big nowadays.” Older customers are also shifting over to larger screens because the fonts are bigger in the applications.

A range of 4-inch smartphone displays paved the way for the mini tablets. Samsung’s Galaxy S2, a mega-hit product launched in April last year that has sold over 20 million units worldwide, has a 4.6-inch screen, and the first Galaxy S had a 4-inch screen. Rumors have been growing that the much-anticipated succeeding model, the Galaxy S3, may have a 4.8-inch screen. The date of its release has not been confirmed, but industry watchers say it should be in late May.

The size of Apple’s next iPhone, the Galaxy S series’ biggest global rival, has also been the subject of much speculation. Its release date isn’t known, but Apple enthusiasts wonder whether it will remain at 3.5 inches or grow into a much-bigger 4.6-inch screen. “It’s our company policy not to comment on rumors, but what’s certain is that big doesn’t necessarily mean better,” said Steve Park, an Apple spokesman.

The Lumia 900 from Nokia also reflects the latest fashion in screen sizes. Put on sale in the United States on Sunday with an attractive price tag of just $100, the smartphone, which runs on the Windows 7.5 operating system, has a 4.3-inch screen, 0.8 inches bigger than the iPhone’s.

Although it created the mini tablet boom, Samsung was not the first electronics producer to come up with a 5-inch smartphone. American electronics producer Dell in late 2010 introduced an Android mini tablet called Streak, and Pantech, Korea’s third player in the smartphone business, released the Vega No. 5 with a 5-inch screen in July. But neither has proved popular and Pantech soon ended sales of the model.

“At the time when we were releasing the Vega No. 5, a 5-inch screen was considered an unexploited domain,” said a spokesman for Pantech. “Since it was sort of an experimental and progressive move, we manufactured a minimal number and discontinued the product soon. But we think the phones we are releasing in the future will definitely be equipped with a bigger screen than in the past.”