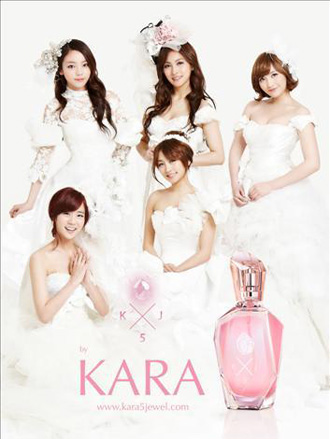 Girl Group Kara will launch its signature perfume starting mid-April.
The bottled scent is called K5J (an acronym for KARA 5 JEWEL) and has the meaning that five members took part in creating a jewel.
The perfume was created by the company Three Cups Yard LLP and the girls of the group spent time in Paris with designers and professional perfumer in Paris.

The perfume was available for fans to pre-order from April 2 through the official Web site: www.kara5jewel.com. To mark its launch, a DVD containing clips of the girls creating the scent at the perfumery in Paris will be given out with each purchase.
“We hope that the Paris that we saw and felt all around us will be able to be felt by our fans. Without their love and support, none of this would have been possible,” said the band.
By Carla Sunwoo [carlasunwoo@joongang.co.kr]