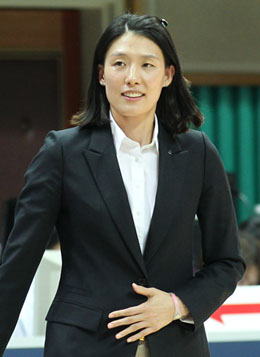 While the S-birds were still celebrating, being congratulated by other teams in the WKBL award ceremony on Monday and digesting interviews from local media, the team heard shocking news on Tuesday: Their assistant coaches Chun Joo-won and Wi Seong-woo were heading to Chuncheon Woori Bank Hansae.

Both signed three-year deals with the club. Wi will be serving as head coach while Chun will be his assistant.

For S-birds fans, the departure of Chun is especially shocking. Chun, 40, was a franchise star who stayed with the team for 21 years. In fact, her No. 0 jersey was permanently retired to honor what she has done for the team.

Chun was a legendary player not only for the S-birds, but also for all of women’s basketball in Korea.

Chun started her career with the Hyundai Development Company, now the S-birds, in 1991. The 176-centimeter (5-feet, 9-inch) point guard dominated the local basketball scene with her athleticism and passes.

She also shined in international tournaments as well. Chun was the only Korean basketball player to have a triple-double in the Olympics. In the 2000 Summer Games in Sydney, she had 10 points, 10 rebounds and 11 assists against Cuba in the group stage.

Chun retired in 2004 after becoming pregnant with her first child, but came back in the summer of 2005.

Although she was in her mid-30s, her performance didn’t decline. She claimed the assist title for seven consecutive seasons until the 2009-10 season.

In addition, she took the MVP in 2007 and was named the championship series MVP in 2010, while her S-birds started to dominate the WKBL with victories.

Chun retired last season and started her career as an assistant coach. Her experience and legendary status helped S-birds players build their skills.

In an interview with Ilgan Sports, the JoongAng Ilbo’s sports daily, on Tuesday, Chun said she is now ready for a new challenge outside of the S-birds.

The Hansae was the worst team in the WKBL, with seven wins and 33 losses last season. In fact, the team was at the bottom for the last four years, but Chun is confident that she and the other coaching staff can turn the team around.

Q. How did you come to the decision?

A. I thought serving as an assistant coach with Woori Bank will give me an opportunity to learn. With Shinhan Bank, I had a comfortable time coaching with a good head coach and players. But now I just want to go elsewhere to learn something more.

Was the decision your personal greediness to become a successful coach?

Well ... I won’t call it “greedy,” but I just want to have the right challenge as a coach this time.

The Hansae is weaker than the S-birds. Do you think it’s going to be a difficult challenge?

I really think it won’t be easy. The Hansae remained at the bottom of the league table for the last four years. The first thing that I need to do is boost the confidence of players. This can’t just come with a lot of training. I think we need some time.

The S-birds players were in tears during the WKBL award ceremony. How did you feel?

I also felt sad that I will not be with them. I asked them not to cry, but it was still heartbreaking. But on the other hand, I also have expectations on my new start. You know, the S-birds are not a team that will fall apart even with my absence.

Did head coach Lim Dal-shik persuade you to stay?

He looked a little disappointed, but in the end, he respected my decision. Lim encouraged me and coach Wi to give my best try with the other team.