Women’s golf tees off at home

Women’s golf tees off at home 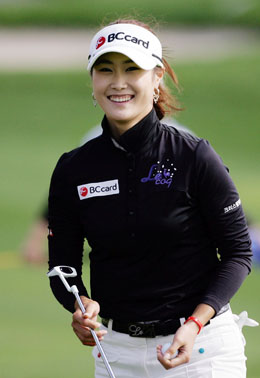 Korean ladies have already been swinging their golf clubs in the U.S. and Europe, but now they can also take to the grass at home as the first tournament of this year’s Korean Ladies Professional Golf Association (KLPGA) tees off today.

The Lotte Mart Women’s Open starts its four-day tourney at the Lotte Sky Hill Country Club in Seogwipo, Jeju, today with 108 golfers. The winner will receive 100 million won ($87,512) out of a 500 million won total purse and will be eligible to play in the Lotte LPGA Championship in Hawaii next Wednesday.

The 2012 KLPGA season, which will run until November with 20 events, officially started last December with the Hyundai China Ladies Open in Xiamen, China.

Since that was held outside of Korea and players have now completed their winter training, the Lotte Mart Women’s Open is considered to be a real season opener for many fans.

This season, women’s golf is focused on whether Kim Ha-neul can cement her No. 1 status in the KLPGA. With U.S. Women’s Open champion Ryu So-yeon and Seo Hee-kyung announcing that they will focus on LPGA Tours in the U.S., the chances of Kim defending her domestic championship looks positive.

The 24-year-old Kim stepped up as the top golfer last season by collecting the most prize money (524 million won), most wins (3) and the Player of the Year award. The only title she missed was for scoring, which went to Lee Bo-mee.

Kim, who has six wins in the KLPGA, spent her winter in Australia undergoing rigorous training focusing on her swing and short game for this season. With some experience added overseas before heading to the new KLPGA season, she signaled that this year could be another impressive one.

In the Ladies European Tour, Kim shared second place at the Gold RACV Australian Ladies Masters in February. In the LPGA, Kim was invited to play in three tournaments as the KLPGA’s top prize money earner.

Kim tied for 24th at the Handa Women’s Australian Open and shared 20th at the Kia Classic. At the LPGA’s first major tournament last month, the Kraft Nabisco Championship, which was won by Korean Yoo Sun-young, Kim tied for 11th with three other golfers.

However, one thing that concerns Kim for the KLPGA season opener is the golf course. At the Sky Ocean course at the Sky Hill Country Club, listed as a par 72, 6,238 yards, Kim has not collected a single victory in her 10 attempts.

“I haven’t won a trophy, but I think the course suits me,” Kim said. “Since I’ve been maintaining my form by participating in other events, I think this year will be different.”

Sim, who collected her first career win by winning last year’s event, had strong finishes at the course.

Meanwhile, Park Ji-eun (Grace Park) will make her KLPGA return after collecting six career wins in the LPGA Tour in the U.S.