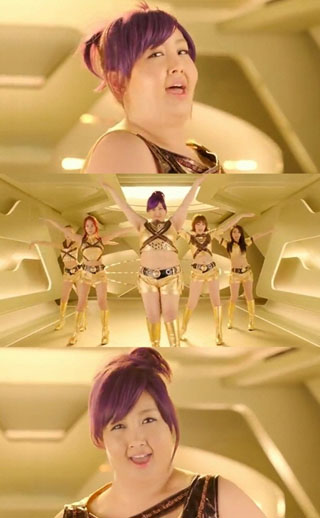 KARA has become the new face of a soya based Japanese snack from Otsuka Company.
On April 10, the girl band attended a press conference in Tokyo to promote the snack that was to go on sale from April 11, as well as to show the two versions of the commercials.

In one clip, the group can be seen adorned in gold and dancing its trademark dance moves that has the girls turning their waist and hips round and round.
In the alternate version, Nicole donned a fat suit to emphasize the pitfalls of snacking on unhealthy snacks.

The snack endorsed by the Korean group boasts that it’s not fried like alternative snacks on the market. The fact that there is only 123 calories per packet is thought to be its selling point.
The TV commercials will start wiring in Japan from April 14.
By Carla Sunwoo [carlasunwoo@joongang.co.kr]