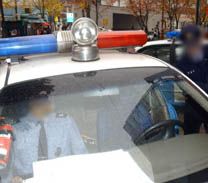 Prosecutors said about 50 police officers in Gangnam have received billions of won in cash bribes from the owners of 30 room salons, or hostess bars, in last two years.

The police officer who gave prosecutors the details claimed fewer than six officers in his station have clean hands. The informer added that he was manager of the payments.

The JoongAng Ilbo reported exclusively that prosecutors secured testimony from a police officer arrested Saturday as a part of an investigation of bribery of the police by hostess bar owner Lee Gyeong-baek, the so-called Room Salon King.

The Seoul Central District Prosecutors’ Office said yesterday that the officer is surnamed Park, 48, from the Nonhyeon Police Station in the Gangnam Police Precinct, who was recently arrested along with two other officers at Nonhyeon No. 2 police station on suspicion of taking bribes.

Park said there were two vice teams in both of the police stations in Nonhyeon, which meant that a total of 60 million won was raked in by the two stations monthly.

“The total amount that the police officers got from the room salon owners is about 1.44 billion won and about 50 police officers are involved,” a spokesman of the Seoul Central District Prosecutors Office told the JoongAng Ilbo.

Park said each vice team had an officer who managed the money, as he did. Park also said only three to five police officers in his station did not take bribes from the room salon owners, the spokesman said. “Most of the police officers in Gangnam received the bribes monthly and extorted extra money from the owners individually,” he said.

Prosecutors said Park was arrested on suspicion of receiving 50 million won in cash from Lee Gyeong-baek and decided to spill his guts in hopes of getting lighter punishment from the court.

“It is absurd that the police didn’t punish a single police officer although they have investigated 69 police officers who contacted Lee Gyeong-baek in 2010,” a spokesman for the prosecution told the JoongAng Ilbo.

The prosecution launched a large scale investigation earlier this month after securing testimony from the room salon king, who had been under investigation for hiring teenage hostesses and evading taxes.

It learned from hostess bar owners that police officers in Gangnam have received more than 5 billion won worth of bribes in cash, designer goods such as Hermes purses and Mont Blanc watches, free international travel and private golf lessons.