First sale from one collector to be held

First sale from one collector to be held

It is not uncommon for auction houses in Europe and North America to hold sales of art works belonging to a single major collector, such as the auctioning of late Hollywood icon Elizabeth Taylor’s art collection by Christie’s in February. But such a sale has never been held in Korea.

K Auction, the nation’s second-biggest auction house, is attempting this for the first time on the peninsula on Wednesday. 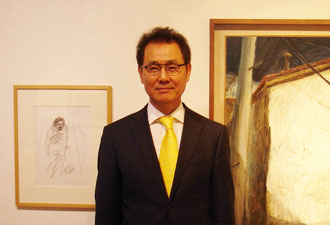 “Special Auction with Eum’s Collection” will present 92 pieces of work from the possessions of Eum Joong-ku, head of the Wellside Gallery in southern Seoul. The 59-year-old has sold and collected art over the last three decades.

The collection includes works by the most popular Korean abstract painters such as Kim Whan-ki, Park Seo-bo and Lee Kang-so. It also includes a lithograph by the famous Spanish surrealist Joan Miro and a Joseon-period closet.

But the artist Eum and K Auction want to highlight in this sale is Son Sang-ki (1949-88), a relatively unfamiliar figure to the Korean public.

The artist suffered from rickets and died at 39. During his short life, Son painted “dark paintings with light,” according to famous modern painter Jeon Hyuck-lim. The dark paintings mainly depict urban landscapes with neglected people amidst Korea’s rapid economic growth. Four oil paintings and six drawings by Son will be put on sale in Wednesday’s auction.