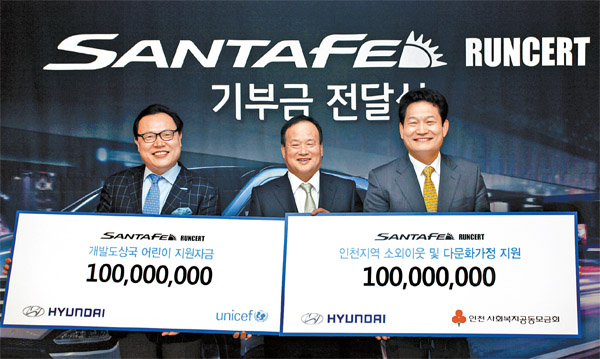 On Saturday, Hyundai Motor Group President Kim Choong-ho, center, donated 100 million won ($87,900) each to the Korean Committee for Unicef, represented by Ryu Jong-soo, left, and the Incheon Community Chest of Korea, represented by Incheon Mayor Song Young-gil, right. The donation is part of a promotional event for the newly released Santa Fe SUV. Separately, Hyundai and its subsidiaries announced yesterday that they will provide 619 million won to more than 2,500 small and medium companies that work with the group this year. The amount was increased by 50 percent compared to last year. The fund is intended for research and development that will help the businesses gain global competitiveness, according to the group.

Provided by the company