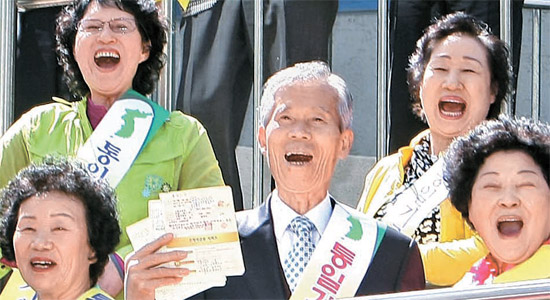 Thirty-three South Korean elderly people have been raising money for the past four years in preparation for the unification of the two Koreas.

The day he opened the account was the same day Japan began its colonial rule over Korea in 1910, Kim said.

Although he has no family members or relatives left in the North, he wanted to do it simply because “the country was freed from Japan’s ruling, but we still can’t get along with each other.”

He also said Paik Young-hoon, president of Korea Industrial Development, visited the village eight years ago and gave a speech about the importance of civilians raising money in preparation for unification, given the case of West Germany where citizens had saved funds before their unification with the East.

Paik, a former German interpreter for late President Park Chung Hee, was a renowned expert in Germany’s unification, and his speech inspired Kim.

After that, 32 other elderly residents in the village joined Kim’s move, transferring different amounts of money monthly into Kim’s account.

They also launched their own fundraising campaign starting from October 2009, attracting other people.

Their campaign spread to other regions in the South Jeolla province. Now, about 350 residents in the province are donating their money to Kim’s account, including a county officer and an elementary school student.

The total amount of the money in the account has reached more than 22 million won.

Kim’s daughter and granddaughter also joined the campaign, transferring 9,000 won each monthly to his account.

“Many members of the younger generation are avoiding taking the burden of unification costs and I was also indifferent in preparing for it,” Shin, Kim’s 27-year-old granddaughter, said. “I’m promoting the campaign to my friends as well.”

“Although it’s not a lot of money, we saved part of our pocket money given from our children or our humble profits from selling vegetables that we grew on our own,” Kim said.

“We will hand down the money to our descendents,” he said, “and save the money until the two Koreas are reunified.”

Inspired by the elderly’s campaign, Paik launched a civic group called the Peace Unification National Forum based in Goheung, holding demonstrations and forums about the necessity of financially preparing for the unification.

“If the government starts a fundraising campaign, it could get on North Korea’s nerves,” Paik said.

“Now I think is the time to give hope to the North Korean people - civilian to civilian, human to human.”