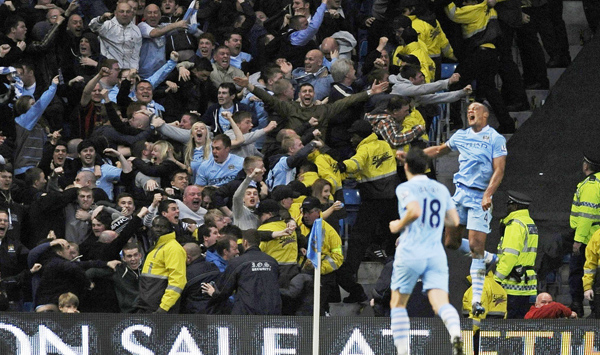 
MANCHESTER, England - Manchester City’s victory over Manchester United sparked wild celebrations among the blue half of the city on Monday, yet two tricky fixtures lie between the team and its first English league title since 1968.

Vincent Kompany’s header in first-half stoppage time earned a 1-0 win to put City level with United on points with two games to play, but ahead on goal difference.

Assuming United wins its final two games against Swansea and Sunderland - two teams with little to play for - then City must also win its final two matches against teams that desperately need victories.

City’s next game is away against a Newcastle United team still chasing Champions League qualification, followed by a season-ender against a Queens Park Rangers side battling against relegation.

“It’s not finished,’’ said City manager Roberto Mancini. “If we think it’s finished it will be a big mistake.

“We are very happy, but next Sunday we will have another difficult game [against Newcastle]. Very difficult,’’ Mancini said.

City’s win on Monday was not as emphatic as its remarkable 6-1 win in their initial league match at Old Trafford earlier in the season, but the tension level was up several notches.

That was reflected in the second half when Mancini and United manager Alex Ferguson confronted each other on the sideline and had to be kept apart by officials as they yelled and gesticulated at each other, though tempers had calmed enough by the end of the match for them to shake hands.

The confrontation was sparked by a hard challenge by City’s rugged midfielder Nigel de Jong on United striker Danny Welbeck, catching him across the ankle and Achilles tendon.

Though Welbeck played out the game, he reportedly left Etihad Stadium with his ankle in a protective cast, putting him in doubt for the final two games and perhaps a place in England’s Euro 2012 squad.

Mancini had publicly written off his team’s title chances when it trailed United by eight points at the beginning of April.

Whether it was a genuine opinion or an attempt to reduce the pressure on its players, it seems to have paid off - and he continued to play down expectations even after going to the top of the standings.

“I don’t think it’s important what I say to my supporters or my players,’’ Mancini said.

“It’s important that we work well and that we play a good game on Sunday against Newcastle.

“In two games, everything can happen,’’ he said.

“We have a big respect for United because we know they are a strong team. We have two tough games; instead, they have two easy games.’’

City led the league for most of the season, but dismal away form culminated in a loss at Arsenal at the beginning of April that looked to have cost them the club the title.

However, United left the championship door ajar by conceding two late goals in a 4-4 home draw against Everton prior to the Manchester derby.

This unexpected opportunity is one that Kompany, the Manchester City captain, said the players were determined not to let slip.

“We’ve been waiting for this moment,’’ he said.

“It’s far from over, and we know that, but just to give our fans two wins over Manchester United this season - we have to finish it off.’’

The derby win meant City has now won all but one home match this season, drawing the other.

“Newcastle is now our focus,’’ said goalkeeper Joe Hart. “Hopefully we can push on and get one game closer.’’