Remembering, and forgetting, the Gwangju massacre

Remembering, and forgetting, the Gwangju massacre 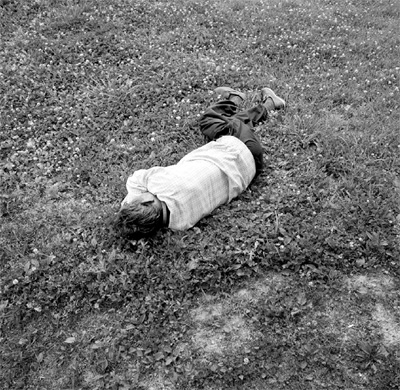 Photos of stone Buddhas lying in Unju-sa Temple and a man sleeping in a grass field of the temple, above, are part of Noh Suntag’s solo show “Forgetting Machines,” about the remembering and forgetting of the Gwangju Democratic Movement and its victims.


A collection of black and white portrait photographs now hang on the walls of Hakgojae Gallery in the art zone east of Gyeongbok Palace in central Seoul. The faded, damaged and distorted faces in the photos make for ghostly and haunting images.

They are the works that photographer Noh Suntag has made by retaking funerary photographic portraits put in front of the tombs of those who were killed during the May 18 Gwangju Democratization Movement in 1980. These works carry the images of weathered photos in the old cemetery of Gwangju, without retouches.

“Since democratization, the movement and victims have been officially commemorated, but the remembering has been always accompanied with forgetting,” Noh said at a press preview on Thursday.

“Even documentaries help not only with remembering but also with forgetting. But I don’t intend to criticize forgetting. I just want to show and let people think about what is remembering and what is forgetting and how they coexist now.” 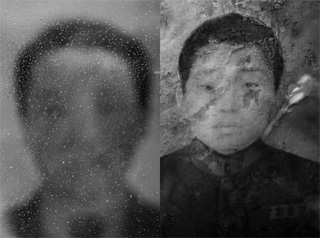 The 41-year-old artist is best known for his “The strAnge ball” series showing various scenes of Daechuri in Pyeongtaek, Gyeonggi, where residents have been protesting the expansion of a large U.S. Army base. His works seldom dramatize or beautify scenes, but their unique angles, atmospheres full of strange tensions and delicate aesthetic effects can stop and attract even viewers who don’t agree with the political views of the artist critical of conservatives and the current government.

The exhibition includes not only the portraits but also photos of various landscapes and scenes related to the traces of the Gwangju Democratization Movement. It ends with photos of stone Buddhas lying in Unju-sa Temple in Hwasun County, South Jeolla, and a man sleeping in a grass field of the temple, whose pose resembles that of the Buddhas.

“I heard that many bereaved family members of the victims of the Gwangju massacre visited the temple to seek consolation,” Noh said. “They did so especially because the sculptures of lying Buddhas, which are very unique for Buddha statues not only in Korea but also in other countries, reminded them of their family members lying dead on the streets. 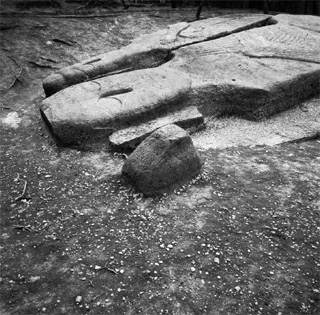 “In addition, Unju-sa has always been a temple reflecting the grassroots’ yearning for a new and better world,” he continued. “The Buddhas in the temple are Mireuk or Maitreya, who is a future Buddha that will save people [like the Messiah]. Legend has it that when the lying Buddhas in Unju-sa stand up, the new world is coming.”