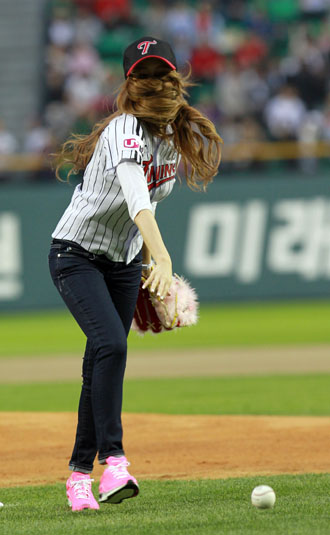 All eyes from the U.S. are on Jessica from Girls’ Generation, but for all the wrong reasons. A video of Jessica pitching the ceremonial first pitch at the 2012 Paldo Pro Baseball game which took place on Friday in Jamsil, eastern Seoul has seen Jessica become the target of ridicule in the world of sports.

The online article and video uploaded on Saturday on Sportsgrid.com is titled, “How Not to Throw a Ceremonial First Pitch,” and describes Jessica as a San Francisco-born member of Girls’ Generation who can’t “throw a ball for shit.”

The video also depicts the miserable fail of a pitch where Jessica, looking the part steps onto the field, pulls all the right moves then pitches the ball into the ground before she is escorted off by two mascots.
Even the girl group member herself seemed to be laughing at her miss while the Web site went on to say, “Strange that they have a batter actually stand there for the first pitch — like he would actually swing at something she threw.”