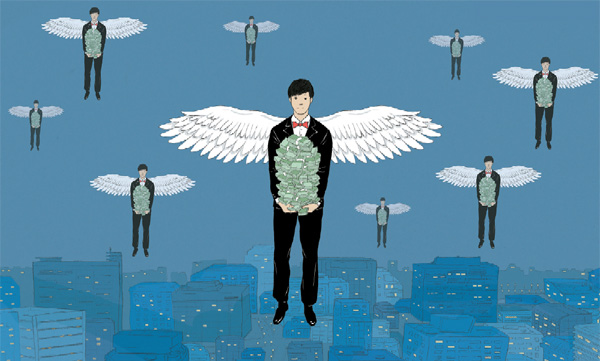 Ever since the dot-com bubble burst in the early 2000s, the once-booming venture capital market has failed to regain its momentum, remaining instead as a period of faded glory in the minds of Koreans.

The combined value of venture capital firms in Korea had hovered above the 1 trillion won ($876 million) mark in early 2000 and tumbled to less than 1 billion won in less than a year. When the bubble burst, investors lost their appetite for high-risk, high-potential tech start-ups.

Beginning late last year, however, hopes of overcoming the trauma have come into sight with angel investors beginning to join forces once again.

The number of angel investors - a term used to refer to wealthy individuals who provide capital for start-ups often in exchange for convertible debt or ownership equity - rebounded to more than 1,000 as of April, compared to 784 in 2010, according to data gathered by the Small & Medium Business Administration (SMBA).

At the height of the dot-com boom, there were almost 29,000 angel investors in the Korean venture capital market. Their combined capital investment hit 549.3 billion won in 2000 and fell to 32.6 billion won a decade later. This year, angel investments are on pace to surpass 100 billion won.

“Angel investment is showing signs of reviving,” said Kim Chae-gwang, an official at the Daejeon-based SMBA. “We are increasingly receiving inquiries from prospective investors and are actually seeing them create angel clubs. We are expecting to see the clubs bearing fruit in six months.”

Angel investors who organize themselves into angel clubs and pool their investment capital are considered crucial for fledgling firms with innovative ideas or technologies but little resources.

A matching fund picks a qualified start-up that is less than 3 years old, finds an appropriate angel investor group and provides the same amount of capital as the angel investor.

The venture capital to be matched by the fund is required to have a record of investing more than two times in the past two years. 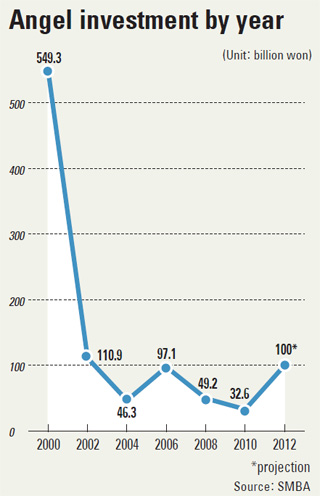 Show me the money

A smartphone application developer and social media marketing start-up, 9 Flava, became the first recipient of the matching fund in February. It received 108 million won from the Go Angel Club, an amount that was doubled under the SMBA initiative.

“Soon it was used up for product development and other operations and we were in need of more angel investors at the time when we were chosen to receive the matching fund. It was definitely a huge help for us.”

Propped up by the promotional effect of being the first state-run matching fund beneficiary, the eight-month-old enterprise is receiving repeated investment. On Wednesday, the firm received 300 million won in additional investment and more is on the horizon, Park said enthusiastically.

Its Wepass app, running on both iOS and Android, makes it possible for a group of at least three people such as college classmates or work colleagues to have a shared mobile coupon so that the members can accumulate points or miles at affiliated stores.

That eliminates the need to carry paper coupons in your wallet and the business model thrives on the concept of the more people who use the app, the bigger the benefits.

Angel-in-us Coffee, a chain run by Lotte Group, was the first to run the mobile app starting in March and the service is now available across 500 stores nationwide.

Many other angel investors are first-generation tech entrepreneurs who are increasingly lending hands, and cash, to their successors. And it’s not just benevolence motivating their financial moves - hefty returns have made it worthwhile.

One notable example is Bon Angels Partners, a venture capital investing group and consulting service provider. Having invested in a dozen start-ups since April of 2010, it reaped 10 times the capital it had invested in Enswers, the video search engine that was sold for 45 billion won to KT late last year.

Bon Angels also earned almost 5.3 billion won when Madsmart, the developer of TicToc smartphone messenger, was sold to SK Planet in April. That is more than 15 times the initial money it had invested in the start-up. The series of successful deals has given Jang Byung-gyu, the firm’s CEO, the nickname “Hand of Midas” in the venture capital community.

Kim Bum-soo, one of the founders of the most popular smartphone messenger KakaoTalk and the chairman and founder of NHN, has invested in junior businessmen who are still in college - mostly those majoring in engineering - or have recently graduated.

In late March, Kim established K-Cube Ventures, which specializes in forming a fund sized between 10 billion won and 15 billion won to invest in local start-ups. “We aim to foster 100 start-up CEOs,” he said at the time. “Should a firm have an excellent idea, we are willing to set aside over a lump sum of 1 billion won.”

In addition to efforts from individual entrepreneurs, industry leaders have also stepped up efforts to assist start-up firms

Named Nexon and Partners Center, the space can accommodate up to three firms while the company pays rents, furnishings and maintenance fees.

“Since we had such a meager beginning, we know what’s necessary and what’s difficult for the budding entrepreneurs,” said Seo Min, chief executive officer of Nexon.

Among foreign investors, Japan’s Softbank Ventures is one of the most robust start-up incubators. In late March, the company, in collaboration with Stonebridge, a Korean private equity fund, set aside 1.5 billion won for ID Incu, developer of a real-time mobile survey application called Ovey.

The firm, established last year by three entrepreneurs in their 20s, has recently opened an office in San Francisco on the back of financial support from the SMBA and is set to launch a localized version of the application in the United States soon.

VCNC is another beneficiary of Softbank investments. The developer of mobile application named Between received 1 billion won from the Japanese enterprise that saw potential. In just five months since its launch, the app has attracted 720,000 users. 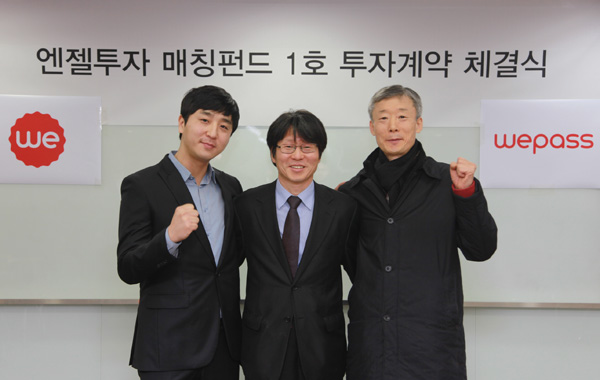 In this photo taken in February, Park Sung-jun, CEO of 9 Flava, left, celebrates the pick of his start-up as the first recipient of the Angel Investment Matching Fund from the state-run Small & Medium Business Administration. Go Angel Club, chaired by Go Young-ha, right, and the SMBA invested a combined 216 million won in the developer of the Wepass mobile application in recognition of its business potential. Provided by 9 Flava

But the majority of Korean IT startups are open-minded when it comes to the nationality of investors.

“Korea is not in a position to complain about the inflow of foreign investors,” said Go Young-ha, a politician-turned-investor who has been called a guru of venture capitalists since the late 1990s.

“We appreciate that non-Korean firms are offering opportunities for the Korean youngsters to garner corporate success.”

He is also leader of Go Angel Club, one of smartphone app developer 9 Flava’s angel investors. Since 2008, he has led a monthly gathering of tech-related entrepreneurs called Go Venture and became chairman of the Angel Leaders’ Forum in March. Go Venture started out with a negligible number of members - 10 in 2008 - but the venue is now packed with over 300 attendants each time.

“Entrepreneurs have long been thirsty for information and networking ever since the venture boom crumbled,” Go said.

“Korean conglomerates are in the middle of growth without job creation,” he said. “Although many such as Samsung, Hyundai and SK are doing well on the global stage, now there is no guarantee for their sustainability in the future.

“The United States also has large, historic firms such as GM, but it is now being led by IT firms like Google, Apple and Microsoft. What about Korea?”

Internet and gaming firms such as NHN, Daum Communications, NCSoft and Nexon are only a handful of tech firms that survived the venture breakdown. Go said government support is crucial, but fostering entrepreneur spirit should be a top priority.

“In the U.S., some 70 percent of college graduates consider opening their own business and each year 600,000 star-ups are born. In contrast, Korean students want jobs that promise stability and sustainability and top students choose to become doctors and lawyers. Less than 5 percent become entrepreneurs.”

Even if they do launch start-ups, entrepreneurs’ ideas, technologies and passions are not enough to bring success, he continued. “They need mentors and investors. And politicians and the government need to pay more attention.”

The Ministry of Strategy and Finance has recently come up with a new method to assist newcomers in the entrepreneurial community. It announced on May 1 it would introduce crowdfunding to facilitate fundraising early next year following revisions of capital market law.

The method is already popular in the cultural sphere when it comes to small-sum donations for art projects or budding artists. Well-known art crowdfunding sites in the United States include Kickstarter.com and IndieGoGo.com.

To prevent ill-intended enterprises from perpetuating scam, the ministry will take preliminary measures such as limiting the maximum amount of collected fund at 1 billion won or 20 times the initial capital. Managing derivatives using the investment fund will be banned and individuals will be allowed to invest only up to 10 million won.

“Start-ups that require a marginal amount of initial capital or those that have yet to show conspicuous growth are having hard time attracting investors,” said Hong Nam-gi, head of policy adjustment bureau at the ministry.

“Diversifying the channel of fund-raising sources especially for one-man enterprise or those that have started with a single idea is necessary. Mobilizing social networking sites that are exploding in terms of the number of users and influence as a capital source channel will lead to greater added value.”