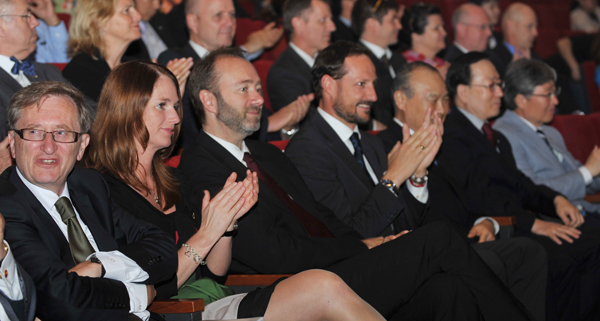 
YEOSU, South Jeolla ? As part of a two-day visit to Korea, the Norwegian Crown Prince Haakon appeared yesterday at his nation’s pavilion at the Yeosu Expo to coincide with Norway Day, the second of the national days at the expo.

Denmark’s Crown Prince Frederik, flanked by his wife Crown Princess Mary and dozens of their entourage and camera-flashing journalists, grabbed much of the attention on the opening day Saturday.

The expo, officially the International Exposition Yeosu 2012, is turning into an assembly of nobles as several European royals visited or were confirmed to visit Korea to support their country’s pavilions at the three-month event.

The royals from Monaco, Sweden, Norway, the Netherlands and Belgium are to follow suit in the coming weeks to enjoy the smorgasbord of culture, activities and festivities at the expo, which represents 104 countries.

The Korea Pavilion, which allowed general visitors to share viewing time with the royals, screened a 10-minute-long computer-graphic movie on the value of water. The part where a draught-stricken village turns into a water-filled paradise drew smiles from the viewers, including the crown prince.

“He was very excited over the way you have organized the exhibition,” Ole Sohn, Minister for Business and Growth of Denmark who accompanied the crown prince, told the Korea JoongAng Daily.

“I am sure he is very happy to be here, and to strengthen the relations between Denmark and Korea.”

The official opening of Norway Day took place at 10 a.m. yesterday, and the public was able to have a glimpse of the Crown Prince Haakon, who headed straight to the expo upon his arrival in Korea.

As the theme of the expo is “Living Ocean and Coast,” the Norway Pavilion emphasized that the sea and coastline are as crucial to the entire world’s welfare as Norway’s own.

The Norwegian commercial counselor Bjorn Bjornsen stated that the crown prince has a busy day today in Seoul with his business delegation, including Minister of Trade and Industry Trond Giske and State Secretary in the Ministry of Fisheries and Coastal Affairs Kristine Gramstad, which includes a plenary sessions on maritime affairs.

Fellow Scandinavian country Sweden’s King Carl XVI Gustaf and Queen Silvia will make their first official visit to Korea at the end of the month for a four-day trip starting from May 29 at the invitation of President Lee Myung-bak, the Swedish embassy in Seoul said at a press conference on Thursday.

A Swedish Film Festival will be held in honor of their visit.

The ambassador of Sweden to Seoul, Lars Danielsson, stated, “The King and Queen only make two to three state visits per year. This is done with lots of preparation from the royal court and the foreign ministry, thus we would like to have the king visit the most interesting and promising countries in the world. The question is: ‘Why haven’t they visited Korea before?’?”

Monacan head of state Prince Albert II (well known to Koreans thanks to the popularity of his mother, Princess of Monaco and American actress Grace Kelly) and Princess Charlene will come next month for a five-day trip to Korea.

They will spend most of their trip at Yeosu, arriving at the World Expo on June 2 and visiting the Monaco Pavilion on Monaco Day on June 3. They will launch the 3rd Monaco Blue Initiative, which focuses on the integrated management of marine life, the following day.

The Embassy of Belgium also confirmed that Prince Philippe will attend the Belgian National Day with several ministers at the expo on June 10, but will not be accompanied by his spouse during his stay in Korea.

Earlier this month, the Embassy of the Netherlands also revealed a member of the Dutch royal family will be visiting Yeosu next month, but has not yet made an official announcement.