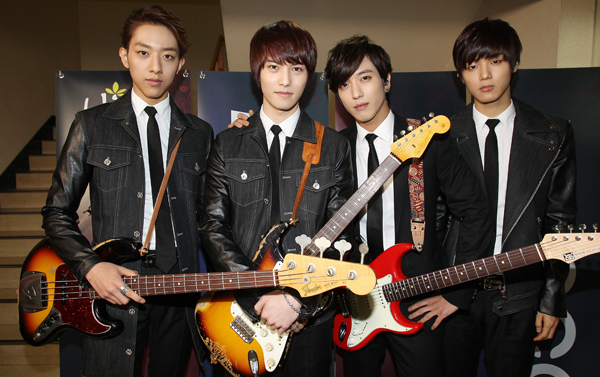 
Boy band CN Blue is on a roll in Taiwan, topping six different music charts on the island.

Its new EP “Ear Fun” was released there on May 4 and on the day of its launch, it reached the number one spot on G-Music Chart, one of Taiwan’s most popular music Web sites.

The EP, which is sold together with a special DVD, also performed well on other charts such as Books.com. tw, Taiwan’s leading online retailer.

Although the album was released earlier this month, it topped charts that record sales figures from April through May.

On Chia Chia Records as well as on eZpeer and various mobile download Web sites, the album also usurped the No. 1 spot.

According to the band’s agency, the CN Blue’s popularity is steadily increasing in Taiwan. When the band held a concert there in February as part of its “Blue Storm” Asian tour, tickets were sold out within just 13 minutes of going on sale.
By Carla Sunwoo