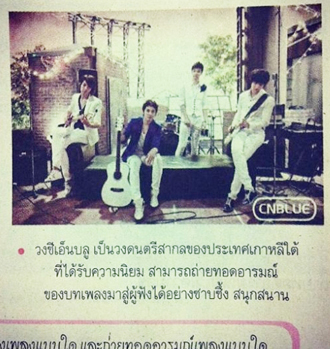 CN Blue has been included in part of the school curriculum in Thailand. A Thai student uploaded a picture of a page taken from their music textbook on May 14, in which a picture of the band and a mention was made.

The textbook denotes the band as such: “A popular Korean band. The group is known for its lively beats and sentimental lyrics.”

Meanwhile fans and netizens have been gushing over the band’s colossal achievement, with many saying, “So proud to have them represent Korea.”
Just days earlier, the band again made headlines for topping six different music charts in Taiwan.
The group’s new EP “Ear Fun” was released there on May 4 and on the day of its launch, it reached the number one spot on the G-Music Chart -- one of Taiwan’s most popular music Web sites -- as well as many others.