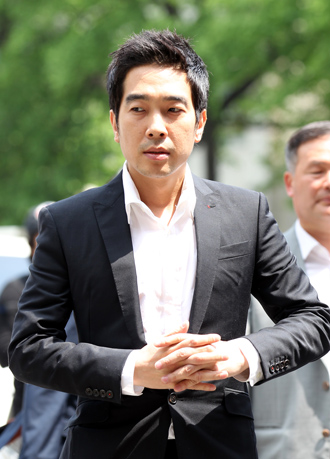 Former idol star Ko Young-wook spent more than 10 hours in detention at the Yongsan Police Station on Tuesday being investigated on charges of sexual assault against a minor.

An official complaint about Ko raping an aspiring entertainer surfaced about a week ago, and while Ko was at the police station, a local media outlet received a tip that more than one child victim might be involved in the case.

“While we were in the middle of investigating whether Ko raped a minor, another victim came forward with the same complaint,” a police representative said. “Thus, we started investigating this, too.”

When journalists quizzed Ko about the allegations as he made his way out of the station, the entertainer merely stammered, “It’s personal!”

Media also asked Ko if he was guilty of the charges. He deflected questions by simply saying, “I’ll continue to cooperate with the police.”

Ko rose to fame in the 1990s as a member of the idol group Roo’Ra. By Carla Sunwoo