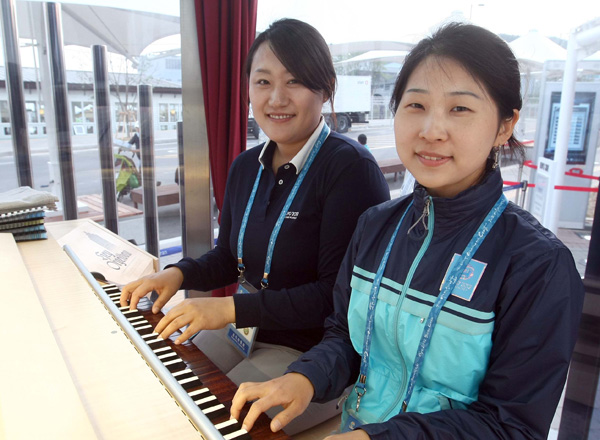 
YEOSU, South Jeolla - All across the Yeosu Expo on Wednesday afternoon, the tune of the famous Korean traditional folk song “Arirang” was heard loud and clear.

“We hope to let the world know about the charm of the Yeosu Expo through the loudest music,” said Kim Seong-hee, 33, who plays the pipe organ.

The Vox Maris is listed in the Guinness Book of World Records as the world’s loudest outdoor pipe organ.

“I feel great pride about playing the pipe organ at an international event,” Kim added. “I have put a lot of effort into choosing the scores and playing them, down to the smallest detail, so that visitors can get to know a little bit more about pipe organs, which are generally thought to be exclusively played at churches.”

At the expo, the organ is also played by a 27-year-old named Limb Dan-bi, who alternates with Kim every 30 minutes. The pair starts the day at 9 a.m. and finishes at around 11 p.m. They play one or two scores of music from each of the participating countries.

“The Vox Maris is a merger between Germany’s instrument-manufacturing technology and the latest IT technology,” Limb said. “It is a very special instrument, and every time I play the Vox Maris, I am totally immersed in its charm.”

Kim and Limb both studied music in Germany, though at different institutes. Kim studied pipe organ music for six years at the University for Music and Performing Arts, Munich, while Limb was a student at Cologne University of Music.

Tomas Hey, who constructed the pipe organ, said he gave the instrument a Latin name meaning the sound of the sea, as it makes a sound that is similar to that of a boat horn.

Hey said the instrument was particularly appropriate for the expo as the event focuses on issues about the ocean.

The Sky Tower where the organ is installed was once a silo that stored cement. Expo organizers turned the installation into an environmentally friendly exhibition hall. At 67 meters (220 feet) tall, the tower transmits the organ’s 138 decibels to a six-kilometer (3.7-mile) radius.

Both Kim and Limb said they didn’t hesitate to apply for the musician’s post at the expo, and that the job has lived up to expectations.

“The response from the visitors has been amazing,” Kim said. “Once, a 60-year-old man from Daegu came up to me with a score from the movie ‘Titanic’ and asked me to play it. The request made me realize the true force of the Vox Maris.”