Medical tourists from UAE get healed in Korea

Medical tourists from UAE get healed in Korea 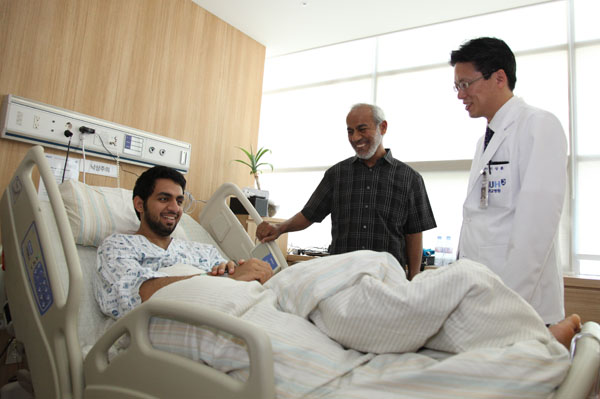 
Last Friday, Lee Sang-hun, a 41-year-old professor and orthopedic surgeon at the Seoul National University Hospital in Jongno, central Seoul, treated an unusual patient: Hamad Al Kaabi from Abu Dhabi, the capital of the oil-rich United Arab Emirates. Lee asked Hamad if he felt any pain in his left knee. The 25-year-old patient moved his leg up and down, and said he felt pretty good.

Two days earlier, Dr. Lee performed kneecap surgery on Hamad. The operation involved relocating some dislocated bones in Hamad’s knee. Before coming to Korea, Hamad had undergone three separate surgeries in his home country from 2006 to 2010. But the results were unsatisfying, which brought him to Korea.

“The overall structure of the patient’s bones was different so the surgery itself was very difficult as we had many things to consider,” Lee said. “Also, because he had not received proper rehabilitation treatment after the three operations he had in his home country, his muscles were in bad condition.” Lee said his operation was a success and Hamad was receiving physical therapy to improve his muscle strength.

“After touring Korean hospitals last November, I thought to myself that I should bring my family members that need treatment,” Jamal told the JoongAng Ilbo.

When Jamal told his younger brother to get his knee fixed in Korea, Hamad asked doubtfully, “Why Korea?”

The Abu Dhabi Health Authority normally sends its citizens to countries like Germany or the United States. Before the two countries signed the agreement last year, Hamad knew nothing about Korea except for the fact that Park Ji-sung, a Korean soccer player, was playing for Manchester United.

“Now I’m able to understand why my brother wanted me to receive treatment in Korea,” Hamad said. “Korea’s medical teams are very talented,” said Hamad, adding that he will persuade a friend who has neck surgery planned in Germany to come to Korea instead.

Over the past six months, the Abu Dhabi Health Authority has sent eight patients to Korea for liver and kidney transplants and cancer treatment. There are also patients who receive light medical treatment or check-ups, like Mohammad Al Kaabi, the two brothers’ father.

While his second son was having his surgery, Mohammad got a comprehensive checkup at the Seoul National University Hospital. Next week, he will also get a thyroid checkup.