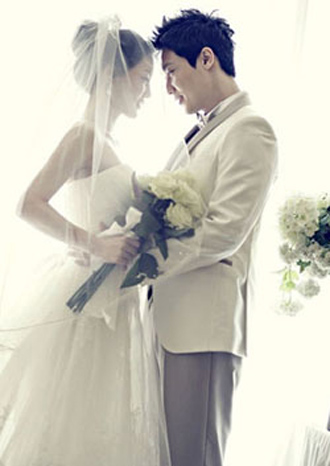 Two of the most prominent musical actors in the nation walked down the aisle yesterday after dating for six years.

Kim Sun-young and her beau Kim Woo-hyung, who is seven years her junior, tied the knot at El Tower in Yangjae-dong, southern Seoul.

The two met on the set of the musical “Jekyll and Hyde” back in 2006 and have been dating since. There were many entertainers in attendance at the wedding ceremony, ready to wish the newly weds good luck.

Most recently, Kim Woo-hyung performed in the musical “Miss Saigon.” He is set to star in a production called “Bungee Jump” from July 12 until Sept. 2.

The new bride, Kim Sun-young, is the star of the musical “Elisabeth,” which is currently running.

JYJ’s Kim Jun-su also stars in this exaggerated theatrical rendition of the life of one of Austria’s prominent figures.