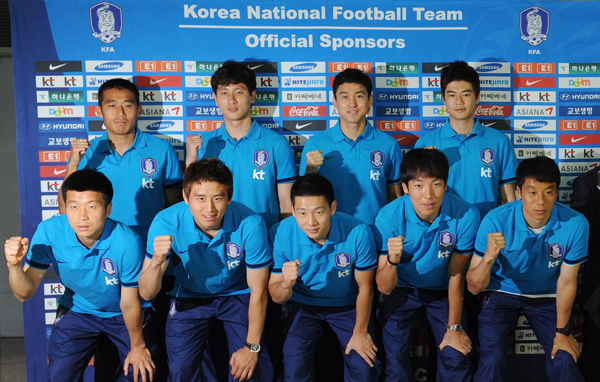 Nine national football team members, including Celtic FC midfielder Ki Sung-yueng, back row right, pose at Incheon International Airport yesterday before heading to Switzerland for their friendly against Spain on May 30. [NEWSIS]


The national football team left for Switzerland yesterday to get ready for its friendly against world No. 1 Spain and prepare for next month’s Asian qualifiers for the 2014 FIFA World Cup against Qatar and Lebanon.

Led by manager Choi Kang-hee, the Taegeuk Warriors face Spain at the Stade de Suisse in Bern, Switzerland, on Wednesday before heading to Qatar to play their first final-round Asian qualifying match for the World Cup on June 8. The team is scheduled to return to Korea on June 9 to prepare for their next qualifier against Lebanon on June 12.

Choi, who announced the 26-man squad last Friday, said that the team is primarily focused on the qualifier against Qatar and views the friendly against Spain as a tune-up. The former Jeonbuk Hyundai Motors coach said it is unfortunate that Spain and Qatar play different styles, but what’s important is how his national team prepares and performs.

“In every campaign, the first match is crucial,” Choi said to reporters at Incheon International Airport before departure. “We will try to finish our first match well and start the final round of Asian qualifiers on a good foot.”

Among the 26 players, only nine have left the country with the coaching staff as of yesterday.

While Hamburg SV striker Son Heung-min and FC Basel defender Park Joo-ho will join the team in Switzerland, K-League and some J-League players are scheduled to fly to Europe after they end their weekend league matches, according to the Korea Football Association.

Four players from Ulsan Hyundai FC, including team captain Kwak Tae-hwi, will be the latest to join the team as they catch flights after they play their AFC Champions League round of 16 match against Kashiwa Reysol of Japan on May 30.

Choi said he will test some tactics and evaluate fitness in the match against Spain. As some local players will not able to join the team quickly, the 53-year-old coach planned that he would form the team around overseas-based players.

Spain, the winner of the 2008 European Football Championship and the 2010 FIFA World Cup, will not have players from FC Barcelona nor Athletic Bilbao, who are playing in the Spanish King’s Cup (Copa del Rey) final today. Star players like Xavi Hernandez, Andres Iniesta, Cesc Fabregas and Fernando Llorente will be left off the squad as coach Vicente Del Bosque wants to give them some rest.

However, their squad is still filled with top-class players who are mostly from Spanish La Liga champions Real Madrid and Europa League champions Atletico Madrid.

Choi said that Korea has built up its form to face the world’s top team, but admitted that it was going to be a tough test.

“There is pressure when meeting the world’s No. 1 team, but we also have our strength and will prepare for the match with a challenging spirit,” Choi said. “It’s a tune-up for Qatar, but we hope to learn something from the match.”

Choi said he wants to set aside issues regarding Arsenal striker Park Chu-young, who is still incommunicado after military-dodging accusations, and Brazilian midfielder Eninho, who failed to get a recommendation for Korean citizenship, and rather look forward to the upcoming matches.