Emotional farewell for the legendary No. 7

Emotional farewell for the legendary No. 7 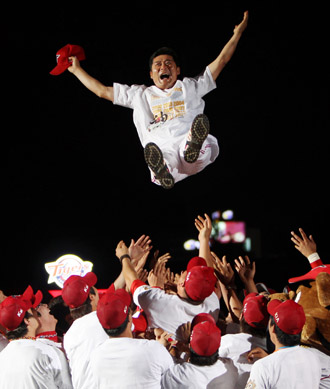 Kia Tigers’ Lee Jong-beom is tossed into the air by his teammates during his retirement ceremony at Gwanju Baseball Stadium in Gwangju, Saturday. Lee’s No. 7 jersey was officially retired by the club. [YONHAP]

On Saturday, the Kia Tigers beat the LG Twins 6-5, but fans at Gwangju Baseball Stadium didn’t rush to exit after the final pitch. The thrilling victory had fans cheering in the ninth, but when the lights went out, the mood changed drastically as all eyes turned to one player.

The 42-year-old wrapped up his 19-year professional career with an emotional goodbye.

Lee, who holds KBO records for the most hits (196) and steals (84) in a season, announced his surprise retirement last month, shocking baseball fans. It was reported that Lee made his decision after he found out that he will not be given much playing time under the new manager Sun Dong-yeol.

Despite the controversy, the Gwangju-based ball club put together a retirement ceremony to honor their hometown hero.

To be there for Lee’s final goodbye, many fans were eager to attend Saturday’s game against the Twins. The Tigers said 11,500 tickets were already sold in advance while another 1,000 were sold on site shortly after the ticket box opened.

The signature event lasted an hour, but the line didn’t seem to diminish.

Many fans appeared at the stadium wearing the ubiquitous No. 7 jersey with Lee’s name printed on the back. But they weren’t the only ones - every Tigers player wore Lee’s jersey to show respect and honor their veteran star.

And it was a fitting end for Lee, with the game neck-and-neck in the bottom of the eighth, when Song San delivered the go-ahead double with one out remaining to give the Tigers a one-run lead. They would go on to win the game and extend their winning streak to five.

Just as he appeared in the baseball scene - like a legend falling from the sky - Lee entered his farewell by paragliding into Gwangju Baseball Stadium and landed on the field. Soon after his appearance, a video was shown on the stadium screen documenting Lee’s life and baseball career.

Lee received boxes of sand from the different fields he had played on throughout his life. The sand from Seorim Elementary School, Choongjang Middle School, Gwanju-il Highschoo and Konkuk University were all handed to Lee.

As for the sand from the mound at Gwangju Baseball Stadium, former and current managers of the Tigers - Kim Eung-ryong, Kim Sung-han and Sun - all appeared to deliver the present to their former protege.

Lee, the four-time Korea Series winner with the Tigers, looked emotional and burst into tears when he took off his No. 7 jersey and handed it to Tigers general manager Kim Cho-ho.

And when Kim declared Lee’s No. 7 jersey would be retired, the two big jerseys - white for home and red for away - were hung up as fans began to roar.

It was the second time in the Tigers franchise history that a player’s jersey number has been retired. The first was current Tigers manager Sun’s No. 18. The KBO said that Lee’s jersey will be displayed in the KBO’s baseball museum.

With tears still running down his face, Lee delivered his farewell speech, saying he is now leaving the grounds, but his heart will always be there with the fans.

“The feelings are mixed, but this will be the starting point of my new life,” Lee said. “I promise that I will someday wear that Tigers uniform again and be with you guys.”

While fireworks lit up the night sky of Gwangju, Lee then had a car parade and circled around the stadium with his young teammates escorting him from behind. Lee waived to his fans before getting out of the car to bow his head.

After he was tossed in the air by his fellow teammates, Lee met with manager Sun and hugged him for a long time. While he might have felt disappointed with Sun during the past few months, from that moment it seemed that all the drama was over.