Luke Donald returns to No. 1

Luke Donald returns to No. 1 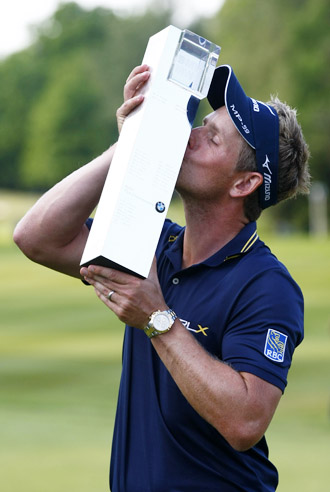 VIRGINIA WATER, England - Luke Donald replaced Rory McIlroy at the top of the world rankings for the third time in 10 weeks by retaining the BMW PGA Championship title on Sunday, boosting his hopes of finally ending his major drought this summer.

Displaying his trademark consistency on the greens and from the tee, Donald cantered to a four-stroke victory at the biggest event on the European Tour by shooting a 4-under 68 - his fourth straight round under 70 - to finish on 15 under par at Wentworth.

Donald’s second victory of the year, after the Transitions Championship in the United States in March, saw him leapfrog McIlroy at the same location where 12 months ago he first guaranteed he would rise to the top of the pile after a playoff win over Lee Westwood.

“There’s something sweet about going 12 months and still being No. 1,” Donald said. “It’s an indication that I’m doing the right things.”

Donald held a two-shot lead over Justin Rose when he began his final round in still, sunny conditions and said he felt tense in the opening stretch of holes, culminating in a bogey 6 on the long fourth.

A birdie for Rose at the same hole drew the players level on 10 under and with Peter Lawrie and Paul Lawrie within two shots at that stage, a tight finish seemed likely.

Donald ensured that didn’t materialize, however, rediscovering his form with the putter to birdie four of the next seven holes - including a 30-foot putt on No. 10 that drew cries of “Luuuuke” from the gallery and left Rose three shots behind and with too much to do.

Finding the fairway with disturbing regularity for his rivals, Donald earned himself the luxury of strolling down No. 18 armed with a four-shot cushion. He suddenly had the aura of the best player in the world.

Rose missed a short birdie putt at the last to finish with a 70 and tied for second with Paul Lawrie, the 1999 British Open champion who compiled a 66 for the joint lowest round of the day with George Coetzee.

“There were no loose shots coming down the stretch. And with his short game and him making 20- and 30-footers, he’s tough to beat,” Rose said of his Ryder Cup colleague.

Not only did a sixth victory in 15 months earn Donald a check of 750,000 euros ($950,000), it also gave him a major lift ahead of next month’s U.S. Open in San Francisco, when he will go in search of a first major title to complete his golfing resume.

“I feel I am getting closer. Every time I get a success like this, it adds to my confidence. These victories are key to bringing that confidence to the majors,” said the 34-year-old Englishman, who topped the money lists both sides of the Atlantic in 2011.

“It’s putting four rounds together like I did this week.”

It’s the sixth change at the top of the rankings between Donald and McIlroy in 12 weeks. McIlroy missed the cut at Wentworth after a second-round 79.

The win ensured Donald became the third player, after Nick Faldo and Colin Montgomerie, to retain the title at the flagship event and marked the first time he has won an event for two straight years.

“I feel that when I’m playing well, I’m hard to beat. But I think there could be 20 [to] 25 guys who would say that,” a typically modest Donald said.

“After the fourth, I didn’t give him [Rose] a hole where he was teeing off first other than the 18th. I got the job done.”

Scores were significantly lower than Saturday, when gusting winds of up to 30 miles per hour played a vital role in splitting the field during the third round.

Peter Lawrie punched the air in birdying the last to finish alone in fourth place after a 71, with South Africa’s Branden Grace (70) - a three-time winner on the European Tour this year - a shot further back in fifth.