Japan gets tetchy over Dokdo at Yeosu Expo

Japan gets tetchy over Dokdo at Yeosu Expo 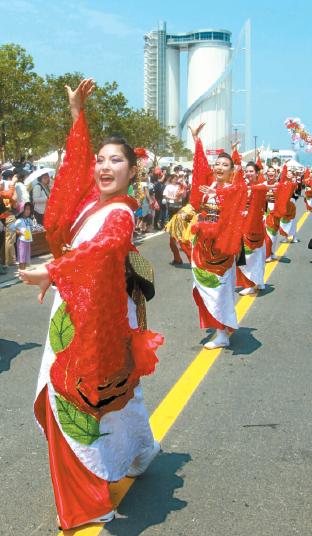 Japanese dancers perform during a parade held as part of scaled-down Japan Day celebrations on Saturday at the Yeosu 2012 Expo. [NEWSIS]

Tokyo downsized a celebration of its national day at the Yeosu 2012 Expo on Saturday, with only manager-level or lower ranking Japanese government envoys attending the event, in protest of Korea’s use of the name of Dokdo and the East Sea at an expo facility.

According to the expo organizers yesterday, the Japan Day ceremony was held for less than 30 minutes Saturday morning in the lobby of the Expo Hall connected to the International Pavilion.

So far, 21 countries held national day events at the Yeosu Expo, and all but Japan sent emissaries led by vice-minister-level, minister-level or higher, including kings or crown princesses.

The 18-member Japanese delegation was led by Yasushi Iwata, a manager in Japan’s Ministry of Economy, Trade and Industry.

“The Japanese side initially prepared thoroughly for the event, but it later curtailed its size at the order of the Japanese government over the controversy of Dokdo,” said an official of the Organizing Committee for the Yeosu Expo.

It was a follow-up measure to Tokyo’s warning on Friday that it won’t send high-ranking government officials to the celebration unless Korea removes the mentions of Dokdo and the East Sea from the expo.

The Ocean and Coast Best Practice Area, located on the second floor of the Theme Pavilion, exhibits a Korean map and miniature replicas of Korea’s marine science bases, including the one that Seoul plans to build next to Dokdo, Korea’s easternmost islets, by as early as the end of this year.

The map describing the marine science base marks the islets as “Dokdo” in the “East Sea.” Japan claims sovereignty over Dokdo and calls the islets “Takeshima” and uses the moniker “Sea of Japan.”

Japan’s Foreign Ministry took issue with the names but what it really protested was the promotion of the Dokdo marine science center, which it has been strongly opposed to, according to an official of the Seoul’s Foreign Ministry.

In its Friday statement, Japan’s Foreign Ministry said it felt sorry that the situation reached such a point despite Japan’s “active cooperation” in the expo. “It is absurd for Tokyo to make such a demand and we won’t accept it,” said a Seoul official.

Several other congratulatory events for the Japan Day proceeded as scheduled, the organizers said, including a 30-minute special concert held under the theme of Korea-Japan friendship.