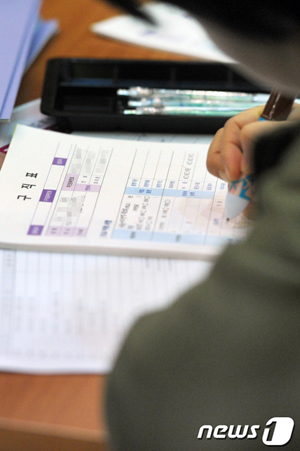 A 63-year-old woman surnamed Jeon, 63, wakes up at 5 a.m. everyday to make breakfast for her son and daughter -in-law, who commute across the Han River to Gangnam in southern Seoul for work. Jeon’s husband, Oh, helps by bathing and clothing the younger couple’s three daughters.

For the grandparents, retirement hasn’t meant a life of leisure but rather a return to the past as they go through the rites of parenting all over again with their granddaughters, who are aged 2, 4 and 6.

Such scenes are becoming increasingly commonplace in Seoul, famously known as one of the hardest-working cities in the world, as more adults move back in with their parents to beat the economic pinch.

“My son can’t bear the living expenses of moving out,” Jeon told the Korea JoongAng Daily. “He barely started his career at the age of 32 because the economy is so tough these days, especially for someone like my son who graduated from a college in Daejeon,” she added, referring to a bias employers occasionally show by being favorable toward graduates of colleges in Seoul.

“I suggested he live with us after he got married because we knew he didn’t have the financial resources to make a long-term deposit on a house anywhere in Seoul.” The trend of adults in their 30s and 40s moving back in with mom and dad due to untenable financial straits has even attracted its own nickname: Kangaroo jok (tribe).

A census jointly conducted by the Seoul Metropolitan Government and Statistics of Korea shows that the number of Seoul citizens aged 30 to 49 who live with their parents has risen 91.4 percent in the last decade. The figure jumped from 253,200 in 2000 to 484,663 in 2010.

In the census, 29 percent of elderly Seoul citizens who live with their married sons said they are motivated by financial reasons. Some10.5 percent of the respondents cited the need to help raise their grandchildren because both parents work. And 21.6 percent of parents cited family ties.

The city government said economic challenges and the tight job market have prompted more Koreans to extend their studies until later in life, meaning that many are not embarking on careers until their late 20s or early 30s.

This retarded upward movement in terms of social mobility and financial independence is causing more people to delay marrying, it said.

“I feel so sorry to my parents that I’m still a weight around their necks at my age,” said Jeon’s son. “But I simply don’t see any other viable option right now.”

Jeon said she is now putting a share of her husband’s retirement annuity into a savings account to help her son buy a house. In a country known for its strong Confucian values, the census also turned up another shock: Less than one-third, or 30.4 percent, of Seoul citizens aged 15 and older said they expected to take responsibility for supporting their parents later in life. A similar census six years ago had 60.7 percent answering affirmatively.

The census showed just 29.2 percent of people aged 60 and older in Seoul are now willing to live with their offspring after they marry. This compares to a more charitable 49.3 percent in 2005.