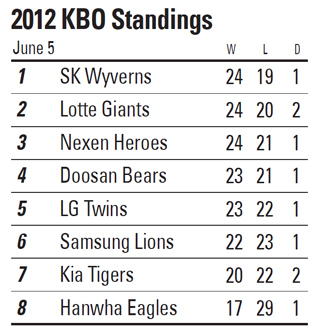 The SK Wyverns managed to secure first place in the standings despite a starting rotation torn apart by injuries. They were not, however, to remain No. 1 in team ERA, as that honor now belongs to the Samsung Lions.

The Incheon-based team, last year’s runner-up in the KBO, has has only two healthy starters - Mario Santiago and Yoon Hee-sang - pitching regularly in their rotation. Other starting pitchers have been in and out of the rotation due to injuries.

But there was some good news for Wyverns fans on Saturday as southpaw ace Kim Kwang-hyun returned to the mound in a 1-0 victory. It was Kim’s first win in seven months.

Kim, who has 52 wins 25 losses with a 2.90 ERA since his KBO debut in 2007, started against the Kia Tigers and left no doubt he is ready to excel again. The 24-year-old, who led the league in wins in 2008 and 2010, held the Tigers scoreless for five innings while collecting four strikeouts.

And there is more good news for the Wyverns: relief pitcher Jung Woo-ram will also return to action this weekend after recovering from a nail injury.

The Wyverns will have another tough test this week as they face the Doosan Bears, who have beaten SK six times in eight head-to-head meetings this season, tonight at Jamsil Baseball Stadium in southern Seoul before hosting the defending champion Lions.

The LG Twins will only play Seoul rivals - the Nexen Heroes and Bears - this week. The Twins, who used seven pitchers in a 7-7 draw against the last place Hanwha Eagles on Sunday, take on the Heroes tonight at Mokdong Stadium in western Seoul.

So called “El Nexlasico” (taken from the Real Madrid-FC Barcelona football match, “El Clasico”), the games between the Heroes and the Twins are fast becoming a rivalry. So far this season, the Heroes have beaten the Twins six times in eight games.

The Twins will then play their Jamsil neighbors the Bears on Friday in their seventh meeting of the season. The Twins are 5-1 against the Bears.

The Twins first need to figure out how to fill the left void by right fielder Lee Jin-young, who was taken off the field after making a diving catch. It was reported that he injured his right hamstring and will take four to six weeks to recover.

The No. 2 Lotte Giants will likely have easy schedule as they face two bottom feeders - the No. 8 Eagles and No. 7 Tigers - this week. The Giants have better head-to-head records against both teams, and the Busan team hasn’t lost a single game to the Tigers.

However, the Giants, who lead the league in team batting at .275, will have to face two of the top pitchers in the Eagles’ Ryu Hyun-jin, the Rookie of the Year and MVP in 2006, and Tigers’ Yoon Suk-min, last year’s MVP after leading the league in wins, ERA and strikeouts.