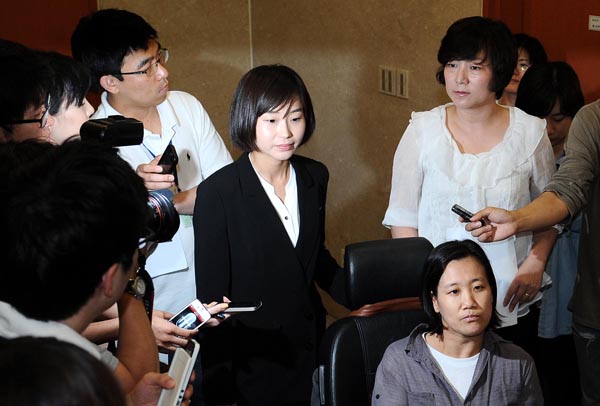 Three of the four Unified Progressive Party members who have refused to resign over an allegedly rigged primary respond to reporters before attending the Seoul regional chapter’s meeting to determine whether to forfeit their proportional candidacies, yesterday in the National Assembly, Yeouido, Seoul. From right to left, Hwang Seon, Cho Yoon-sook (in a wheelchair), and Kim Jae-yeon. [NEWSIS]

The opposition Unified Progressive Party yesterday started internal procedures to expel four members who have resisted stepping down over an allegedly rigged primary.

The party’s Seoul chapter held a meeting yesterday to determine whether they would forfeit the positions of four party members who contested in the party’s proportional primary in March, including two newly-elected lawmakers, Lee Seok-gi and Kim Jae-yeon.

After a regional chapter determines whether to kick them out of the party, the party’s Central Steering Committee will make a final decision. Still, if any member of the party raises an objection, the committee will have 14 days to reconsider the case.

The two lawmakers in the National Assembly, Lee and Kim, will be able to keep their seats as independents under the current law.

Apart from the vote-rigging scandal, Lee and Kim have also been under the spotlight for their pro-North Korea views and beliefs.

Ruling Party’s presidential frontrunner Park Geun-hye publicly said that those “pro-North” lawmakers should forfeit their seats or be expelled from the legislature.

Under the law, if more than two-thirds of current lawmakers agree to expel a fellow lawmaker, he or she must leave the assembly.

Many of the UPP’s largest faction were pro-Pyongyang, anti-U.S. student activists during the democratization movement in the 1970s and 1980s and many still hold those sympathies. That holds true also of members of the larger Democratic United Party.

Some ruling party lawmakers are dreading that this “color debate” - as in many countries, pro-communist individuals in Korea are called Reds - could harm the party ahead of the December presidential election. The opposition is already crying foul over what it calls a “new McCarthyism.”

“It’s definitely clear that the UPP’s largest faction has problems beyond a matter of the election law,” Lee Sang-don, former interim leader of the ruling Saenuri Party, yesterday said in a radio interview. “Still, the thing that we are facing at this moment is apparently the vote-rigging scandal.

“If the ruling party mixes the two different issues together, that could trigger a strong public protest [against cracking down on someone’s beliefs].”

Chung Mong-joon, another Saenuri Party lawmaker, told reporters on Monday, “The reason why the UPP leadership is trying to expel Lee and Kim is because they violated the legal procedure of the proportional primary. I think it’s wrong to expel them because of their pro-North stances. We can’t expel a lawmaker simply because he has problems in his ideology.”

Lee Jae-oh, the ruling party lawmaker who has declared his run in the presidential election, also told reporters on May 27, “A lawmaker-elect should be expelled by the party he or she belongs to, not by a rival party.”