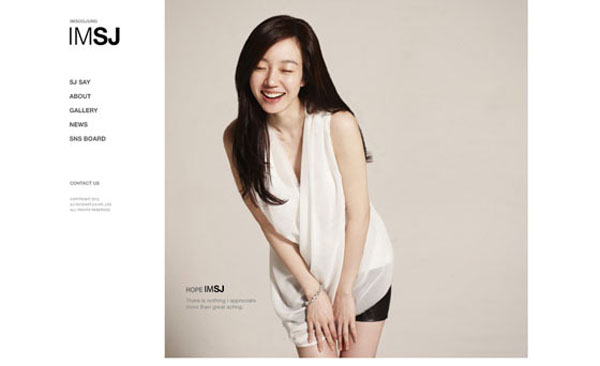 Lim Soo-jung has launched her official Web site at last on June 12. According to the 32-year-old actress, the online space will be a place where she can converse with her fans directly.

Her official Web site (www.imsoojung.com) was opened with five different segments consisting of “SJ Say” where she will upload pictures and messages directly to her fans; “About” where Lim’s profile can be read; “Gallery” where pictures and videos of Lim can be found; “News” where official announcements will be made; and a “SNS Board” where fans can use their SNS accounts to leave Lim a message.

To celebrate the Web site’s launch, Lim uploaded a picture of herself and a short greeting message after visiting an art gallery in Germany.

Lim starred in last year’s hit movie “All About My Wife.”
By Carla Sunwoo [carlasunwoo@joongang.co.kr]