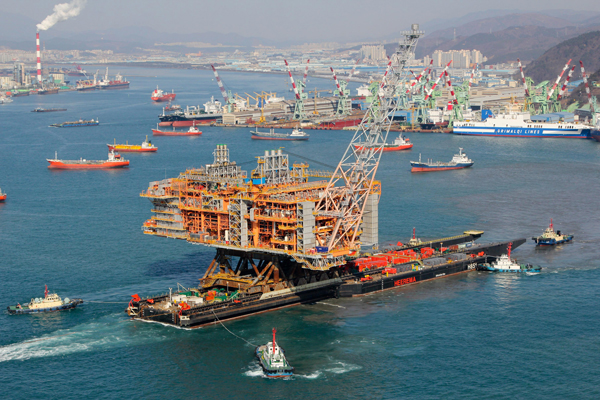 The downgrading of Spain’s sovereign debt rating yesterday, coupled with the upcoming national election in Greece on Sunday, may have a significant effect on local industries and Korea’s financial market.

Shipbuilders could face choppy seas ahead as global ship finance is drying up due to the ongoing financial crisis in Europe, even though the domestic industry does not believe it would be directly impacted were Greece to exit the euro zone.

Meanwhile, Korea’s financial industry has shown resilience to the turmoil.

Local shipbuilders are fretting that the already strained global ship financing industry could freeze up completely if Greece leaves the euro zone following a decisive election in the country this weekend.

“If Greece quits the euro zone bloc, European banks would lose money based on their investment in Greek bonds, which would likely trigger a crunch in global ship financing [as the banks tighten their credit lines],” said Yang Jong-seo at the research institute of Korea Export-Import Bank.
Yang said European shippers, the main clients of Korean shipbuilders, would in that event no longer possess the funds to place new orders, and that fewer orders would cause ship prices to drop further.

Globally, ship prices have been declining since 2007, according to the Korea Shipbuilders’ Association. In the wake of the 2008 global financial crisis, the global ship price index figure plunged from 176 to 137 by 2009, it said. The index began at 100 when it was launched in 1988. The figure has never managed to recover to its pre-crisis level and is now hovering at around 135.
Korea’s three major shipbuilders are weathering the storm by switching their main profit-making streams from drillships to bigger offshore plants that include production facilities. 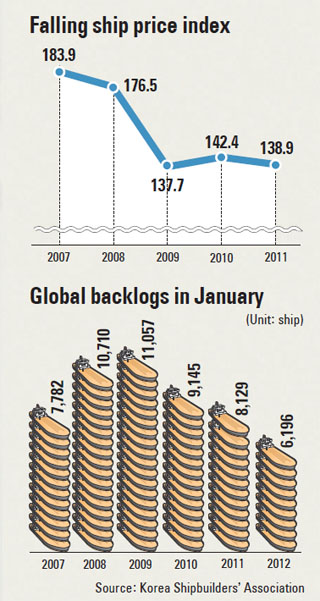 Bucking the trend, Samsung Heavy Industries and Daewoo Shipbuilding & Marine Engineering are performing better than last year. In the first quarter, Samsung has won total orders worth $4.8 billion for three drillships, two liquefied natural gas carriers and one floating gas processing facility. This compares to the $2.6 billion it pulled in during the first quarter last year.

“We were able to earn as much as last year in the first quarter due to the two offshore production facilities,” said an official at Daewoo.

Meanwhile, Hyundai Heavy Industries, the No. 1 player in the world, seems to be struggling this year compared to its two local rivals. It won total orders worth $1.7 billion for nine vessels during the first quarter of this year, just a fraction of the $7.1 billion worth of contracts it agreed in the same period last year for 19 ships and three offshore facilities.

“Korean shipbuilders are relying more on higher value-added offshore facilities with production and offloading functions this year, but orders are forecast to dry up due to the upcoming financial crunch,” Yang said.

He said offshore facilities are the most promising source of revenue for them to be chasing at the moment as they cost around $2 billion each to build.

“As there were many drillship orders made until last year, there will be some demand for offshore facilities including FPSOs to explore underground deposits of oil at sea,” he said. However, he expressed concern that the orders won’t come easily as shippers will likely suffer financial difficulties in the coming years.

However, the local shipbuilding industry is not overreacting to the possibility of Greece exiting the euro zone as it is already in the throes of a years-long downturn that has left it battle-hardened and ready to cope with future financial stresses and fractures.

Furthermore, Korean shipbuilders do not feel greatly at danger from the risk of a so-called “Grexit”as Greek shippers tend to operate separately from their government. They usually register their ships in tax haven countries.