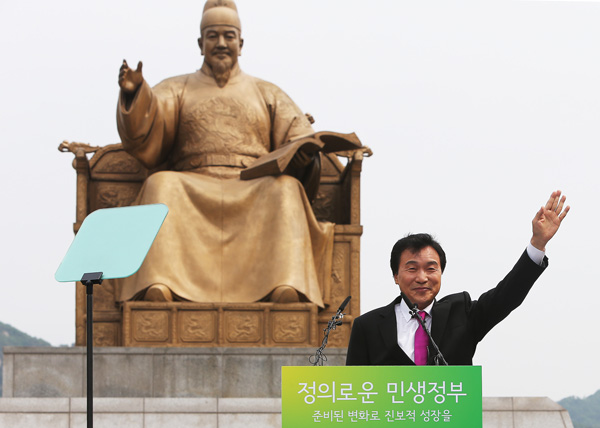 
Sohn Hak-kyu, a political heavyweight of the Democratic United Party, officially announced his presidential bid yesterday, jumpstarting the largest liberal opposition party’s race to select its candidate for the December election.
Sohn, 64, held a press conference in front of the statue of King Sejong in Gwanghwamun Plaza yesterday.

“The spirit of the times for the next president to realize is people’s livelihood and unity,” Sohn said.

“I will serve and communicate with people, support small companies, expand the middle class and unite society and the two Koreas.”

At the press conference, Sohn also presented his key pledges, including a plan to increase the employment rate to 70 percent by 2020.

He also promised to normalize the ownership structures of conglomerates and reform taxation and education systems.

It was Sohn’s second attempt to become the liberal opposition party’s presidential candidate.

Sohn, who started his political career by winning a legislative election in 1993 as a member of the Democratic Liberal Party, a predecessor of the Saenuri Party, left the conservative party in 2007 after his presidential ambition was overshadowed by rivals Lee Myung-bak and Park Geun-hye.

He then joined the Democratic Party’s primary, but was defeated by Chung Dong-young.

Although he lost the presidential primary for the liberal party, Sohn served the Democrats as chairman twice. He served as co-chairman for the Democratic Party in 2008 and was elected again to the post in 2010.

While serving as chairman for the DUP, Sohn also managed to score a victory in the April 2011 legislative by-election in Bundang, Gyeonggi, bolstering his profile as a potential presidential candidate and expanding his power base to the affluent suburb long considered the stronghold of the conservatives.

It remains to be seen if Sohn will be able to translate his success in Bundang into a successful presidential run. In a recent opinion poll, Sohn was ranked third among liberal contenders.

According to the survey, conducted by the Maeil Business Newspaper last week, the popularity of Sohn among the liberal candidates was 7.1 percent.

It was a significant drop from the same research company’s survey last year. In May last year, shortly after his victory in Bundang, Sohn had a 12.5 percent approval rate.

While his popularity gradually dropped, other liberal stars emerged. In the latest poll, conducted Friday and Saturday, Ahn Cheol-soo was rated as the leading liberal contender with 27.6 percent and Moon Jae-in ranked second with 20.6 percent.

Kim Du-kwan followed Sohn closely with 6.4 percent, while Sohn’s 2007 rival Chung Dong-young was backed by 3.9 percent in the survey.