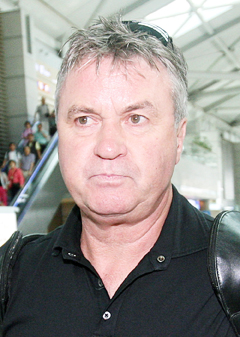 Guus Hiddink, Korea's former national football team manager, will come back to the peninsula next month to lead the Taegeuk Warriors he guided to the semifinals during the 2002 FIFA World Cup, according to the Korea Professional Football League yesterday.

The Dutch manager will be at the helm of Team 2002, comprised of almost the same squad that shocked the world during the Korea-Japan World Cup, which will play Team 2012 during the K-League All-Star Game on July 5 at Seoul World Cup Stadium. Team 2012 will be comprised of All-Star players from the professional domestic league.

The K-League said it sent a letter to Hiddink in April requesting that he guide Team 2002. Hiddink informed the league of his acceptance recently, officials said.

Hiddink, 65, has been a hero among Koreans for his success with the team that had never won a game in a FIFA World Cup. He led Korea past Italy and Spain to reach the semifinals against Germany. Korea is now ranked 35th in the FIFA rankings.

The Dutch manager has frequently visited Korea for football-related business and charity works. When he came last month for a similar purpose, he expressed his wish to re-enact the honor with the same team.

Currently the manager of Russian club Anzhi Makhachkala, Hiddink said at the time that he would arrange his schedule in Russia to participate in the K-League All-Star Game.

"I am touched by his love for Korean football," said Ahn, expressing gratitude to Hiddink for the decision to lead Team 2002.

"We consider it not just a one-time event, but will show our best to show our appreciation."

The league said nearly the same 2002 squad would play for Team 2002, except for some playing or coaching overseas including Lee Young-pyo, who is playing in the Canadian league, and Yoon Jung-hwan, who is coaching in the Japanese league.

It is unclear whether Park Ji-sung of Manchester United, who has been Hiddink¡¯s beloved pupil since he played for the Dutch club PSV Eindhoven, will could play in the game.