Rooney's the only goal that counts

Rooney's the only goal that counts 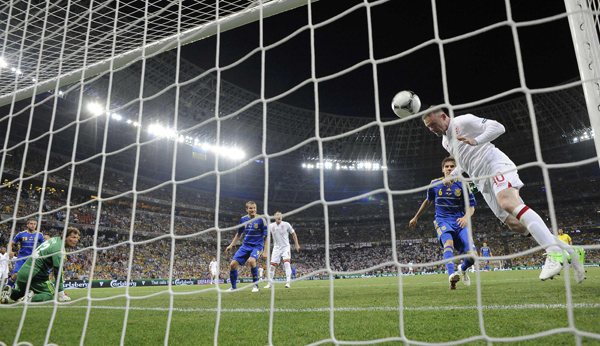 
Only one goal counted, and it belonged to Wayne Rooney.

The England striker returned from a two-match suspension to head in the lone goal on Tuesday and give his team a 1-0 win over Ukraine and a spot in the European soccer championship quarterfinals. The co-host Ukrainians, however, will leave the tournament knowing that things could have been different.

Needing a win to advance, the Ukrainians thought they had tied it the 62nd minute when Marko Devic¡¯s deflected shot appeared to loop over the line before it was hooked clear by England defender John Terry.

But the goal was not awarded by the referee or his extra assistant, who was half-standing on the field only a few feet from the post.

"The goal that wasn't given really changed our plan because if it was given, I think the whole game could have looked another way," Ukraine captain Andriy Shevchenko said through an interpreter. "We tried to give Ukraine a gift but we weren't able to do it."

Although a draw still would have eliminated them, the equalizer would have given the team hope knowing that another goal would put Ukraine through to the quarterfinals.

"I was sad because the ball was in the goal by one meter [3.2 feet]," Ukraine coach Oleg Blokhin said.

The controversy will likely add to the pressure on UEFA President Michel Platini to reverse his opposition to goal-line technology.

It was Rooney, however, who did manage to put his team on the scoreboard.

England captain Steven Gerrard whipped a cross into the penalty area that glanced off two defenders before Ukraine goalkeeper Andriy Pyatov let it slip through his hands as he crouched to collect the ball. Rooney was at the far post and made it count.

"I was always putting myself in goal-scoring opportunities," Rooney said. "I could've done better with a couple more but I got the goal and it¡¯s three points."

Rooney missed the first two Euro 2012 matches through suspension. He was sent off in the team's last qualifier in October, and received a three-match suspension that was eventually reduced to two.

The goal was Rooney's first at a major tournament since scoring four at Euro 2004 as an 18-year-old rising star. He failed to find the net at both the 2006 and 2010 World Cups, while England failed to even qualify for Euro 2008.

"There was a lot of pressure on Wayne [Rooney]," Gerrard said. "But he stood up and when we needed him he was there."

With the victory, England won Group D and will face Italy next in Kiev, Ukraine, on Sunday. France also advanced, despite losing to Sweden 2-0 in the other group match. Ukraine, however, will have to watch the rest of the tournament as spectators, just like co-host Poland.

At the 2010 World Cup, England midfielder Frank Lampard was denied a goal that would have leveled the match against Germany at 2-2. England ended up losing 4-1.

"To be successful you need a bit of luck," Gerrard said. "Two years ago we were unlucky with Frank Lampard and we had to pack our bags."

England is now undefeated in five matches under Roy Hodgson, who took over the team last month following Fabio Capello's resignation in February.

"Most people didn't think we'd get out of the group," Hodgson said. "We've won it on points instead of goal difference as well. This was an away game with a capital 'A.' There were [50,000] people in and only 4,000 brave England fans. When we needed a bit of luck."

Ukraine, which was without Shevchenko at the start due to a left knee injury, had never won at the Donbass Arena on four previous occasions, and failed to seize its advantage this time, too.

With their fans dominating the crowd, the Ukrainians were in control from the outset, far more confident on the ball and containing England inside its own half.