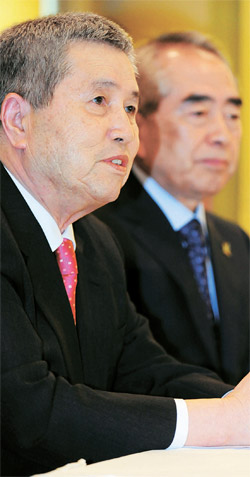 Kim Young-soo, right, the president of the 2014 Incheon Asian Games Organizing Committee, sits besides film director Im Kwon-taek on Tuesday as he appoints Im the executive director of the opening and closing ceremonies at the 17th Asian Games. [NEWSIS]


Legendary Korean director Im Kwon-taek, 76, has been given a special assignment: create the opening and closing ceremonies for the 17th Asian Games, which will take place in Incheon.

“We have decided that Im is most well suited to the job of expressing Korean sentiments and tradition to our audience,” said Kim Young-soo, the president of the event’s organizing committee.

Im’s new position is, in many ways, a natural progression of his career. His talent is internationally recognized today, and he can boast the title “master of the Korean film industry.” But his path to stardom in the directing business was anything but smooth and surprising, for those who follow his work but know little about his personal background.

Im’s first exposure to film-related work wasn’t out of interest, but rather simply to avoid the almost inescapable trap of starvation and poverty that gripped many of his generation. His first job in the film industry was to deliver meals to crews.

Only after years of experience was Im able to produce a film titled “Farewell Duman River” in 1962, his official debut in the film industry. Following his first film’s release, he went on to produce masterpieces such as “The Surrogate Woman” (1987), “Seopyeonje” (1993) and “Chihwaseon” (2002).

Yet, even with such an impressive resume, Im had said that his role with the Asian Games makes him nervous, in part because of a negative experience he had at a similar event years ago.

Im once helped produce documentary clips for the 24th Olympic Games held in Seoul in 1988. But his works were not among those selected to be played at the Games - a decision Im thinks about to this day.

“It was certainly a trauma then and it still bothers me. I have studied past years’ opening and closing ceremonies and feel more prepared this time,” he said. “I want my work to be a positive influence in the country.”

To distinguish his work from ceremonies that take place at the Olympics, Im said he will employ a different approach by focusing on quality instead of quantity. Unlike Olympic ceremonies that aim to wow audiences with fancy effects and expensive supplies, Im plans to “impress” without heavily relying on “impressive materials.”

“I want to portray the hopeful future ahead of us by showcasing the different traditions and cultures of the countries that participate in the Asian Games. I hope to harmoniously blend Korean traditional culture into the intercultural mix,” Im explained.