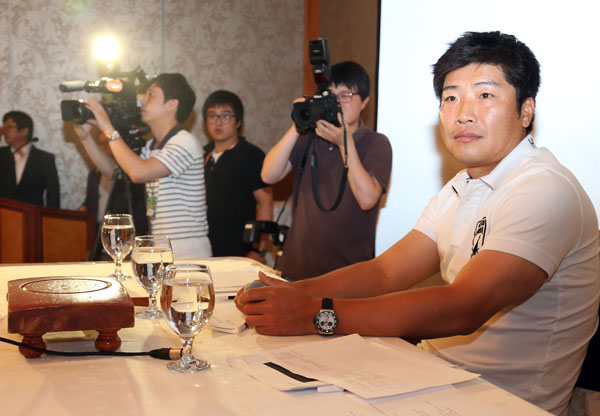 Park Jae-hong, chairman of the Korea Professional Baseball Players’ Association, sits minutes before the announcement of the decision to boycott next month’s KBO All-Star Game at the association’s emergency assembly in Mapo, Seoul, yesterday. [YONHAP]


Tensions are rising between professional baseball players and the Korea Baseball Organization over the addition of one more team, with the Korea Professional Baseball Players’ Association announcing yesterday that athletes will boycott next month’s All-Star Game unless there are concessions from the league on the issue.

The KPBPA, the labor union representing the league’s players, held an emergency general assembly yesterday and declared that if the KBO does not take “concrete approval procedures” to create the 10th KBO team, players will refuse to take part in the All-Star Game.

Under current KBO rules, those who are selected as All-Stars but refuse to play in the match are subject to a 10-game suspension at the start of the second half of the season.

The players’ association said if the KBO imposes the punishment, players may then boycott all league games for the rest of the season.

Previously, the union had said that it would also consider boycotting the World Baseball Classic, to be held in March 2013.

On June 19, a meeting of the KBO’s board of directors including representatives of the teams decided to table the establishment of a 10th team, emphasizing the scarcity of athletes in Korea. There are only 60 to 70 high school teams on the peninsula.

The 31-year-old league approved last month the launch of a ninth team, the NC Soft Dinos in Changwon, South Gyeongsang, which will enter the professional league next season.

Having an odd number of teams will disrupt the current KBO schedule, as every ball club plays a series over the weekend. With nine clubs, one team will have an off weekend.

“It is not just an issue of adding one more team. The survival of Korea’s professional baseball is at stake,” said Park Chung-sik, secretary general of the players’ association.

“We think that resolving the issue is more urgent than holding the All-Star Game.”

If the players follow through, it will be the first time the All-Star Game has not been held since the league was established in 1982. The All-Star Game for the 2012 season is set to be held in Daejeon on July 21.

Park apologized to baseball fans for the players’ decision to boycott the mid-season celebratory event and sought their understanding.

The KBO said it will try to find a solution to keep things from going overboard.

“The players are not at a direct disadvantage from not having a 10th team, so we think they are going too far right now,” an official of the KBO said. “We will take a look at what kind of solution we can find.”

The KBO had said it will wait until circumstances mature for the creation of a 10th team. The league had said that it will create 20 more high school baseball teams and 30 middle school teams over the course of 10 years to help supply more baseball players for the league.

Some of the existing KBO teams are known to oppose the creation of a 10th team as the new club may shift the league’s fan bases.