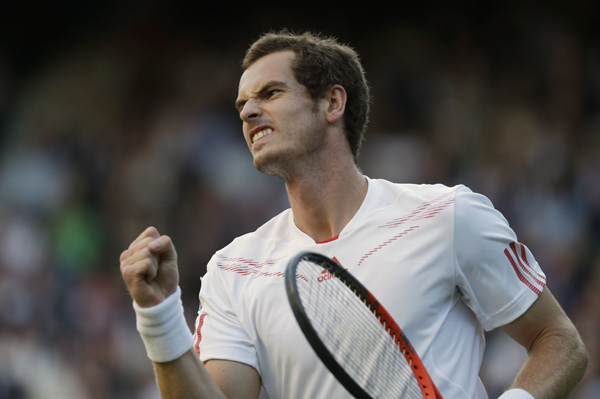 Andy Murray of Britain reacts during a third round men’s singles match against Marcos Baghdatis of Cyprus at the All England Lawn Tennis Championships at Wimbledon, England, Saturday. [AP/YONHAP]


WIMBLEDON, England - Serena Williams fired down a Wimbledon record 23 aces, Yaroslava Shvedova blitzed through a record 24 consecutive points and Andy Murray beat the clock on another night of late drama as the All England Club ushered in the AN (after Nadal) era on Saturday.

Forty-eight hours after brazen Czech Lukas Rosol turned the tennis world order on its head by bludgeoning Rafael Nadal out of Wimbledon and 24 hours after Roger Federer came within two points of losing,

Murray waged his own battle under the floodlights - this time with the clock.

Wimbledon rules state that Centre Court matches must finish by 11 p.m. local time, and with the seconds ticking down it seemed as if Murray would be left hanging in no man’s land till Monday in his third-round match against Cypriot Marcos Baghdatis.

“I was under the impression that at 11 p.m. we were stopping regardless of what the score was, and I think I actually broke serve to go 5-1 at that time and then walked to the net because I thought we were going to have to come back on Monday,” Murray said after speeding through the fourth set.

Time was also an issue for his next opponent Marin Cilic. The Croatian staggered past Sam Querrey 7-6, 6-4, 6-7, 6-7, 17-15 in fading light to win the second longest match at the All England Club.

Two years after John Isner won an 11-hour-five-minute duel against Nicolas Mahut, which featured 183 games and ended 70-68 in the fifth set, a similar battle played out on Court Two.

But at five hours 31 minutes, Cilic achieved his win in less than half the time it took Isner to put away Mahut in 2010.

Earlier in the day, it seemed as if four-time women’s champion Williams also might be on borrowed time.

The American’s serve was on fire and she was never broken, but she was lucky to escape unscathed as she subdued Zheng Jie’s charge with a 6-7, 6-2, 9-7 third-round win.

It was little wonder that Williams arched backward to let out an almighty roar of relief after punching away a backhand volley on her third match point.

It was the same arena that Rosol had found to his liking on Thursday as his ferocious forehands and atomic aces destroyed Nadal’s title hopes.

But 48 hours later, Rosol may be headed back into obscurity after a less than spectacular 6-2, 6-3, 7-6 Court 12 drubbing at the hands of Germany’s Philipp Kohlschreiber.

While Rosol will have plenty of time to reply to the 150-odd text messages he received within minutes of jettisoning Nadal, Kohlschreiber was thanking his lucky stars for not having to face the Spanish world number two.

“I’m very happy that I’m not playing against Rafael Nadal, that’s for sure. If I would have gone into the match against Nadal, there would have been a 90 percent chance I would lose.

Kazakhstan’s Shvedova will be looking to reach her second successive grand slam quarterfinal when she takes on Williams on Monday, but it is unlikely she will repeat the kind of run she enjoyed on day six.

The third-highest ranking American Andy Roddick’s chances of winning the elusive Wimbledon crown faded further into the sunset when he was outplayed 2-6, 7-6, 6-4, 6-3 by seventh seed David Ferrer.

Three-time runner-up Roddick failed to reach week two for the second year running and with his 30th birthday just a few weeks away, the resigned look on his face at the end of the match suggested that even he knew that his time was up.