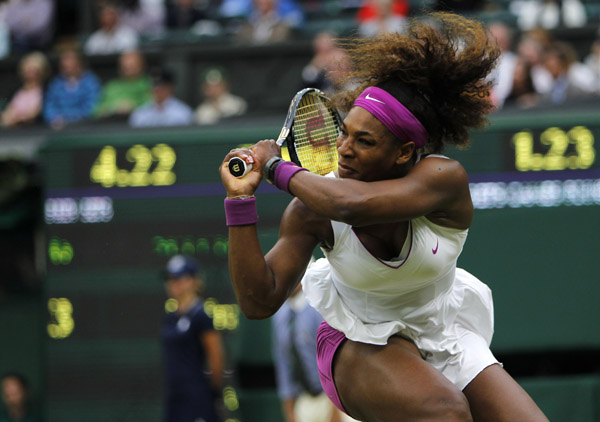 Serena Williams of the United States returns a shot to Petra Kvitova of the Czech Republic during the quarterfinal match of women’s singles at the Wimbledon Championships 2012 in London on July 3. Serena Williams won 2-0. [XINHUA/YONHAP]


LONDON - Scenting a fifth Wimbledon singles title, grass-court predator Serena Williams mowed down defending champion Petra Kvitova to move ominously into the semifinals for the eighth time on Tuesday as the championships again battled the elements.

The 30-year-old American, who still looks unstoppable when in full flow on the lawns, wheeled out the heavy artillery to crack down 13 aces in a 6-3, 7-5 victory that significantly raised the bar in a disappointing women’s tournament.

The men’s tournament got back on track as the five fourth-round matches were completed 24 hours later than scheduled, despite the best efforts of the non-existent British summer.

For a change, it was all rather tame for home favorite Andy Murray who dispensed with the theatrics to ease past Marin Cilic 7-5 6-2 6-3 to reach the last eight for a fifth straight year.

Williams was ruthless against fourth seed Kvitova, who boasted some lethal weaponry of her own.

Czech Kvitova fought fire with fire to stay in touch with the American powerhouse but was eventually de-throned in a high-quality clash which marked Williams’ first taste of life under the Centre Court roof.

“You can’t play a defending Wimbledon champion or grand slam champion and not elevate your game,” Williams told reporters.

“I had to weed out the riff raff and just get serious.”

Williams will face another one in the semis after Australian Open champion Victoria Azarenka beat Austria’s Tamira Paszek.

“Today for me was like 40 hours,” said third seed Radwanska after sealing victory under cover on Centre Court, echoing the thoughts of many of those involved in the championships, having been switched from Court One at 4-4 in the third set after yet more rain in London.

Radwanska, who - along with Azarenka - can replace Maria Sharapova as world No.1 by the end of the week, will tackle eighth seed Angelique Kerber for a place in the final after winning an all-German clash against Sabine Lisicki 6-3 6-7 7-5 despite squandering two match points in the second set.

On the day the women’s last eight normally take centre stage, Murray returned at midday to finish off Croatian Cilic to fuel hopes of a first home men’s winner at the championships since Fred Perry in 1936.

The fourth seed was again held up by rain for a while, but took advantage of a bright slot in the murky skies to dispatch Cilic with minimum of fuss.

Murray will face Spain’s David Ferrer in the quarter-finals in a repeat of their Roland Garros clash after the seventh seed thrashed Argentina’s Juan Martin del Potro 6-3 6-2 6-3.

“To me he’s not a clay-court specialist,” said Murray, outplayed by Ferrer on the French Open dirt.