After painful layoff, Williams is back on top at Wimbledon

After painful layoff, Williams is back on top at Wimbledon 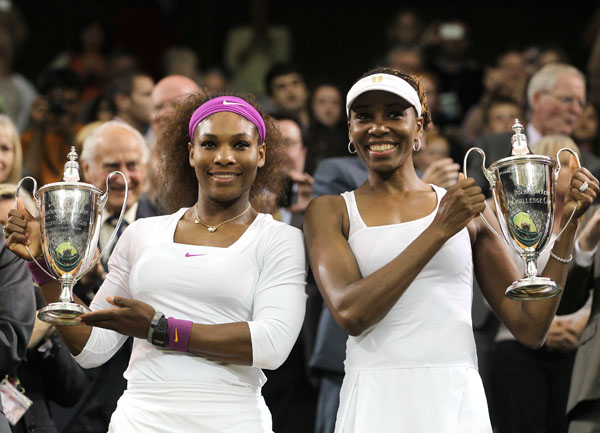 Serena, left, and Venus Williams won the ladies’ doubles final at Wimbledon. After Serena won her fifth singles victory on Saturday, the sisters now own 10 of the tournament’s last 13 singles trophies. [XINHUA/YONHAP]


WIMBLEDON, England - For Serena Williams, the low point came in early 2011, when she spent hours laying around her home, overwhelmed by a depressing series of health scares that sent her to the hospital repeatedly and kept her away from tennis for 10 months.

The high point came Saturday on Centre Court at Wimbledon, when Williams dropped to the grass, hands covering her face. She was all the way back, a Grand Slam champion yet again.

Her serve as good as there is, her grit as good as ever, Williams was dominant at the start and finish, beating Agnieszka Radwanska of Poland 6-1, 5-7, 6-2 to win for the fifth time at the All England Club. It was her 14th major title and it ended a two-year drought.

“I just remember, I was on the couch and I didn’t leave the whole day, for two days. I was just over it. I was praying, like, ‘I can’t take any more. I’ve endured enough. Let me be able to get through this,”?’ recalled Williams, a former No. 1 whose ranking slid to 175th after a fourth-round loss at the All England Club last year, her second tournament back.

“Coming here and winning today is amazing,” she said. “It’s been an unbelievable journey for me.”

That’s why tears flowed during the on-court trophy ceremony. And why Williams squeezed tight during post-victory hugs with her parents and older sister Venus, who has five Wimbledon titles of her own - meaning that one pair of siblings who learned to play tennis on public courts in Compton, California, now accounts for 10 of the past 13 singles trophies. They added their fifth Wimbledon doubles championship Saturday night, teaming to beat Andrea Hlavackova and Lucie Hradecka of the Czech Republic 7-5, 6-4.

“She hasn’t had an easy road. Things have happened in her life that you can’t predict or control, so it’s hard to be in that situation. Things happen that you didn’t deserve,” said Venus, who is dealing with an autoimmune disease that can cause fatigue. “For her to fight through that and come back and be a champion .?.?. it was definitely emotional.”

A few days after winning Wimbledon in 2010, Serena Williams cut both feet on broken glass while leaving a restaurant in Germany. She needed two operations on her right foot. Then she got blood clots in her lungs, for which she needed to inject herself with a blood thinner. Those shots led to a pool of blood gathering under the skin of her stomach, requiring another procedure.

Against Radwanska, who was trying to be the first Polish Grand Slam singles champion, Williams was streaky at times, but also superb. She won the first five games and the last five. She compiled a 58-13 landslide of winners. She swatted 17 aces, including four at 114 miles per hour, 107 miles per hour, 115 miles per hour and 111 miles per hour in one marvelous game to pull even at 2-all in the third set. That was part of a momentum-swinging run when Williams won 15 of 18 points, and that quartet of aces raised her total for the fortnight to a tournament record 102, surpassing her own mark of 89 in 2010.

“So many aces,” said Radwanska, whose two-week total was 16, “and I couldn’t do much about it.”

At age 30, Williams is the oldest women’s singles champion at any major tournament since Martina Navratilova was 33 when she won Wimbledon in 1990.

Asked Saturday evening what more she could possibly want, she replied: “Are you kidding? The U.S. Open. The Australian Open. The French Open. Wimbledon, 2013.”

Seconds later, she declared: “I have never felt better.” AP