All-Star Game or no, Lotte’s Kang Min-ho is a giant with fans

All-Star Game or no, Lotte’s Kang Min-ho is a giant with fans 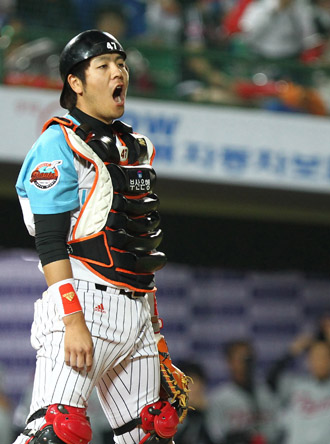 BUSAN - The Korea Baseball Organization All-Star Game, scheduled for July 21 in Daejeon, could be canceled if the association of professional baseball players refuses to budge from its threat to boycott over the KBO’s decision to delay expanding the league by one team.

Regardless of whether or not the game is played, fans have already chosen the star player of the season.

All-Star fan voting wrapped up its six-week run on Sunday and Lotte Giants catcher Kang Min-ho received 892,727 of 1,721,475 votes. It is the biggest total ever for a player in the 31-year history of the league, surpassing the 837,088 cast for Lee Dae-ho, Kang’s former teammate at the Busan-based franchise, who is now playing in Japan.

Only three other catchers have led the All-Star balloting, including Lee Man-soo of the Samsung Lions, who did it in 1984 and three more times after, and Kim Dong-soo in 1995 and Cho In-sung in 2004, both of the LG Twins.

Kang, who is 26 and a native of Jeju, sat down with the JoongAng Ilbo recently to talk about his life and career.

Q. You are running No. 1 in fan voting for the All-Star Game. Why do you think you are so popular?

A. I receive that question frequently these days, but I don’t know why. I am optimistic and positive by nature, and thus always try to smile rather than making grimaces. Seniors make fun of me, saying I smile girlishly with my eyes, but my smiling face maybe makes a good impression with the fans.

When did you realize you were popular?

Not until recently [chuckle]. Many fans in Busan already recognize me, and fans in other cities have just begun to recognize me as well.

You started playing baseball in sixth grade, somewhat late compared with others who start in the third or fourth grade.

I had difficulty because of that. I had to cover my lack of basic skills through private training. When I was in elementary school in Jeju, I could hurl the ball farther than anybody in the school. People told me that I could play baseball well, but my father was against it. I urged him to let me play baseball, to no avail. When my school grades began to fall, finally my father took me by the hand to the baseball team at the school. Father has become a strong supporter since then. He made me do 100 push-ups every night and I think that helped strengthen my shoulder.

Were you a catcher? Don’t people dream of becoming a slugger when they start baseball?

I wanted to become a catcher from the beginning. Wearing a mask and a protector and being in a position to give commands to other players to me looked so cool. But my first position was third base. It was only in middle school that I started wearing the catcher’s mask.


Have you ever regretted being a catcher? It’s tough job physically and mentally.

It really is. There are so many things a catcher is supposed to know and do. Also, it really hurts when a ball hits you. You also have to block the runners charging into home plate. But there is pleasure that no other players but a catcher can feel in winning a game.

You were only a third-round 17th pick in a KBO draft in 2004. Were you disappointed?

No. Because I still could be a professional. I thought I was doing well in high school, but I found out that the level of the professional league was really high. In the early days, when I was not on an active roaster, I trained a lot even during the games, feeling the response from fans at the stadiums. That motivated me.

You had the chance to play not long after you became a professional, right?

Then catcher Choi Ki-moon, currently my catching assistant coach, was injured at the time, so I had to fill his shoes. I was so overwhelmed during the games, so I only followed the directions from the manager and had to do as the pitchers wanted me to. It was so embarrassing when the pitchers shook their heads at my signs. But then catching coach Han Mun-yeon advised that I not be a catcher who follows, but a catcher who leads. So I studied a lot. There is no formula for being a good catcher, and you blow it if you don’t adjust to the conditions of the hitters or circumstances. There were many tough days, but even those days could teach me one by one.

You played in the World Baseball Classic and 2008 Beijing Olympics. Baseball experts expect you to remain a key player for Korea in international matches. What do you think?

I have a long way to go. There are many seniors who can teach me a lot. That’s also how I feel when I play during international games. But it is true that you learn lots of things from those experiences, such as how to manage a crisis. And I want to learn.