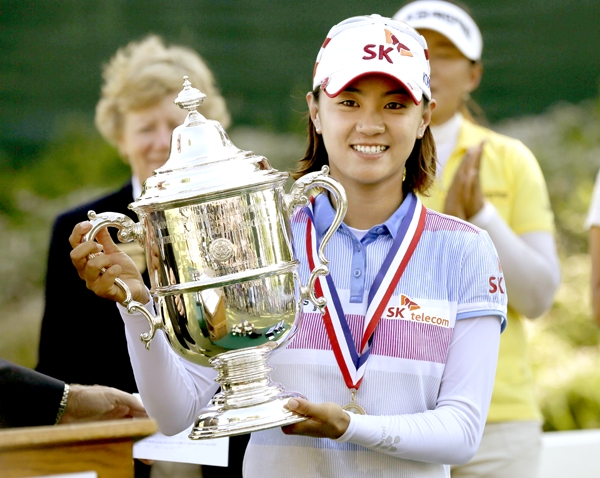 
Korean Choi Na-yeon captured the U.S. Women's Open on the LPGA on Sunday in Wisconsin for her first career major championship.

Choi shot a one-over 73 in the final round for a four-round total of seven-under at the par-72 Blackwolf Run, beating compatriot Amy Yang by four shots. Choi, 24, is the second straight Korean champion of the U.S. Women's Open and the sixth overall.

Choi, ranked No. 5 in the world, entered the final round with a six-stroke lead over Yang at eight-under. Choi had a blistering third round of 65, which featured eight birdies against one bogey, on a day when only she and Yang broke 70.

But the final round was more adventurous. Choi had a bogey on the par-4 opening hole before scoring a birdie on the fourth. She stayed at eight-under until the par-5 10th, where she committed a triple bogey and dropped to five-under.

It cut Choi's lead over Yang to just two shots. But Choi recovered with a birdie on the 11th that pushed her back up by three. On the 12th, Choi found
trouble on the deep greenside rough but drained a 12-foot downhill par putt to stay at six-under.

Yang fell four behind Choi with a bogey on the 14th. Choi picked up back-to-back birdies on the 15th and 16th to extend her lead to five.
Choi and Yang ended as the only two players under par over four rounds on the 6,954-yard layout. Sandra Gal of Germany finished third at one-over.

Blackwolf Run is the same venue where World Golf Hall of Famer Pak Se-ri won the U.S. Women's Open in a dramatic playoff in 1998. Choi is part of a young generation of LPGA stars from Korea referred to as "Se-ri's Kids," those in their early 20s who grew up watching Pak as they nurtured their dreams of playing professional golf. After the final putt, Pak raced to the 18th green and doused Choi with champagne in celebration.

Pak herself ended in a five-way tie for ninth at four-over, joined by the 2008 champion Park In-bee. Lee Il-hee tied two others in fourth place at two-over.

Ryu So-yeon, the defending champion, finished in a tie for 14th with three others at five-over.

The U.S Women's Open is the oldest among four majors on the LPGA Tour, and the only event that has been recognized as a major since the tour's founding in 1950. It offers the highest purse on the tour this year at US$3.25 million.