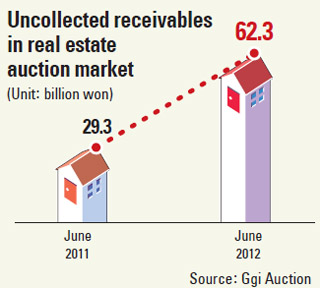 As housing prices keep sliding due to the prolonged economic downturn, indebted owners are seeing their homes and investments plummet in value while creditors are suffering from delinquent loan repayments and lower prices at auction.

Industry insiders say the deteriorating dynamic is creating a vicious cycle for both lenders and loan-holders, as mortgage holders will find it increasingly hard to restore their credit ratings and lenders may face liquidity shortages as they fail to collect debts on time.

According to Ggi Auction, a local real estate auctioneer, uncollected receivables among real estate properties that have been sent to auction totaled 62.3 billion won ($54.5 million) last month alone, the highest monthly record in 18 months. This is more than double the figure seen in the same month last year.

In May 2008, a man surnamed Ahn took out a loan for 1.07 billion won from a savings banks by using his 164-square-meter (1,765-square-foot) apartment in Bundang, Gyeonggi, as collateral. According to Kookmin Bank, Ahn was able to borrow nearly 90 percent of the value of the apartment.

However, his life turned upside down when the global credit crunch battered the country in 2008, causing the real estate market to freeze up. Ahn, who had been relying on credit cards to cover his daily expenses, was forced to auction off his property a year later after he failed to pay back the mounting credit card bills of 20 million won. The house has still not found a buyer.

Industry insiders say it will be all but impossible for Ahn to retrieve his purchase price of around 1.2 billion won given the state of the market. The last apartment of a comparable size from the same complex was sold in December for just over half this price, or 650 million won.

According to Dr. Apt, an online real estate agency, average apartment prices in Korea’s most affluent areas- Gangnam, Seocho and Songpa districts, all in southern Seoul - stood at 945 million won yesterday, down 10.6 percent from December.

Median prices in the so-called “seven bubble” regions of the country, which also include Yangcheon District in Seoul and Bundang, Pyeongchon and Yongin in Gyeonggi, dropped 12.9 percent from 778 million in December to 671 million won last month.

“The value of apartments that were worth a lot before the 2008 financial crisis have fallen into empty tin can,” said Ha Yu-jeong, a researcher at Ggi Auction.

“Both lenders and loan-takers are on a lose-lose course due to the faltering economy.”