Giant blowout for the NL in 8-0 All-Star rout

Giant blowout for the NL in 8-0 All-Star rout 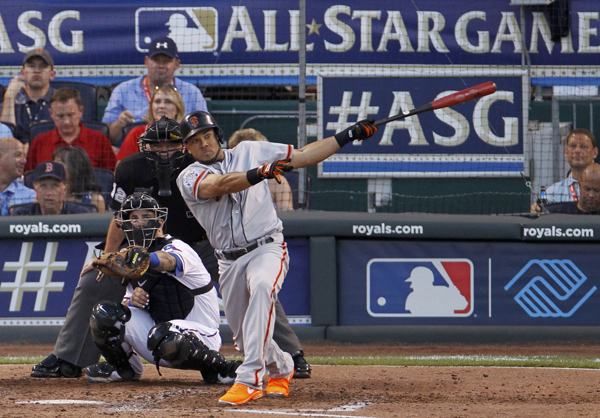 
KANSAS CITY, Missouri - Melky Cabrera and Pablo Sandoval sent the National League to a big early lead. Matt Cain and the rest of an imposing pitching staff finished off a Giant blowout in the All-Star Game.

Flashing their bright orange spikes and booming bats, the San Francisco sluggers keyed a five-run blitz against Justin Verlander in the first inning that powered the NL to an 8-0 romp over the American League yesterday.

Cabrera homered and won the MVP award in the ballpark where he played last season, and Cain got the win in the NL’s most-lopsided All-Star victory.

Chipper Jones singled in his final All-Star at-bat at age 40 as the NL, under retired manager Tony La Russa, once again claimed home-field advantage in the World Series.

La Russa asked Jones to address the team before the game and the Atlanta third baseman told players: “Whether you’re 19 or 40, we are all equals here.”

“I am not going out losing my last one. So, you with me?” he added.

Jones received one of the loudest ovations during the pregame introductions and many players said in recent days they were honored to be All-Stars alongside him.

“I was glad Tony asked me to say something,” Jones said. “I just wanted the guys to know that nothing is a given. You don’t know when your last one is going to be. Don’t miss this opportunity.”

The NL didn’t miss much early.

Ryan Braun, an All-Star again after his drug suspension was overturned last winter, doubled, tripled and made a fine catch in the outfield to help give the NL its first three-game winning streak in two decades.

Teen sensation Bryce Harper had a shaky All-Star debut with a walk, strikeout and missed catch. Fellow rookie Mike Trout, only 20, showed off his dynamic skills.

Cain combined with Stephen Strasburg, R.A. Dickey, Aroldis Chapman and the rest of a lights-out staff on a six-hitter.

The game was pretty much decided a few moments after it started.

Sandoval hit the first bases-loaded triple in All-Star history off Verlander, who couldn’t control his 100 mile-per-hour heat. Cabrera singled and scored the first run, then hit a two-run homer against Matt Harrison in a three-run fourth.

“I don’t get many triples,” said the slow-footed Sandoval, known as Kung Fu Panda. “We had some fun with that in the dugout.”

Nicknamed the Melk-man, Cabrera is with his fourth team in four years. The former Royals outfielder drew big cheers as he received the MVP award, his mother next to him.

San Francisco fans, who made a late voting push to elect Sandoval and Cabrera to starting spots, might really appreciate the victory come October. The Giants are a half-game behind the first-place Dodgers in the NL West.

Rafael Furcal also hit a three-bagger, making the NL the first league with three in an All-Star Game.

As the All-Stars returned to Kansas City for the first time since 1973, La Russa bid a fond farewell to the national stage in the city where he played for his first major league team.

After all the talk about AL dominance during the offseason when Albert Pujols and Prince Fielder switched leagues, the NL boosted its advantage to 43-38-2 and won for just the third time in the 10 years that the All-Star Game has been used to determine home-field advantage in the World Series. La Russa’s Cardinals benefited from last year’s NL All-Star victory, with St. Louis winning Games 6 and 7 at home against Ron Washington’s Texas Rangers. AP