Dream Team 2012 looks to get on a roll in Vegas

Dream Team 2012 looks to get on a roll in Vegas 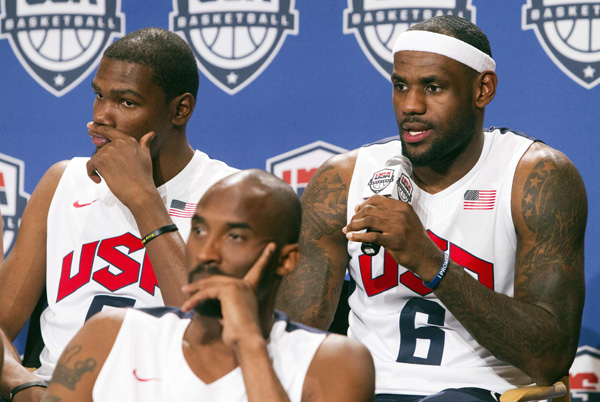 
LAS VEGAS - LeBron James was stretched out against a wall Wednesday, answering questions before lacing up his Nikes. Carmelo Anthony was doing the same thing in the corner of the gym, while Kobe Bryant went about his business across the way.

Talent was never going to be a problem for the U.S. men’s basketball team heading to London as defending gold medal champions.

“We understand why we’re here,” James said. “We’re all superstars on our respective teams. Now we all have to be superstars on this team.”

Assuming that happens, any worries about bringing the gold home from London should pretty much vanish. Sure, Spain figures to be tough and the Russians and Argentinians will pose challenges. And there are some who question the lack of height on this team.

But the U.S. roster is so deep and athletic that the early chatter is that this team could be even better than the last gold medal team - without Dwayne Wade and Chris Bosh, both key performers in Beijing, along with that team’s only true center, Dwight Howard.

Indeed, potential is a word used often about this year’s version of the Dream Team, which opens its Olympic run with an exhibition game Thursday night against the Dominican Republic. Bryant said the other day he believes this team would even beat the original Dream Team, and coach Mike Krzyzewski - an assistant on the 1992 team - seemed inclined to agree.

“This team can be very good,” Krzyzewski said. “They’re all in their prime or coming into their prime.”

Potential, though, will only take a team so far. And so far in their brief training camp on the UNLV campus, things haven’t gone exactly to plan.

A team that was supposed to be in place even before arriving here last week wasn’t, thanks to injuries to Wade, Bosh, Howard and Derrick Rose. The full team wasn’t announced until Saturday, when Blake Griffin, Andre Iguodala and James Harden were added to the roster.

Deron Williams couldn’t scrimmage until signing his new $98 million contract Wednesday, Griffin missed a day of practice while tending to details of his new contract and James has been limited in practice to rest up from the NBA playoffs. Oh, and Chris Paul sprained his right thumb on the first day of practice and missed several scrimmages.

Now, less than three weeks before the U.S. tips off against France in its opening game in London, the team is very much a work in progress.

“It’s a disjointed start,” Krzyzewski said. “That has an impact - a negative impact - that we have to overcome.”

The buzz around the UNLV gym, - on a day when temperatures approaching 115 degrees didn’t deter several hundred fans from waiting outside for autographs - was about the opening exhibition game and the chance to start figuring out positions and rotations.

The game against the Dominican Republic in the 18,000-seat UNLV arena is sold out.

After practicing for less than a week, the game could provide many clues to how good it will be.

Five members of the team that beat Spain in the final in Beijing will be getting their second chance at gold in the second Olympics under Krzyzewski, who was brought in by USA Basketball chairman Jerry Colangelo after a somewhat embarrassing performance by the U.S. in 2004 in Athens. Since then, the national team has gone 39-1, but hasn’t lost since dropping a shocker to Greece in the 2006 World Championships. AP