Orchestra struck up for defectors from North

Orchestra struck up for defectors from North 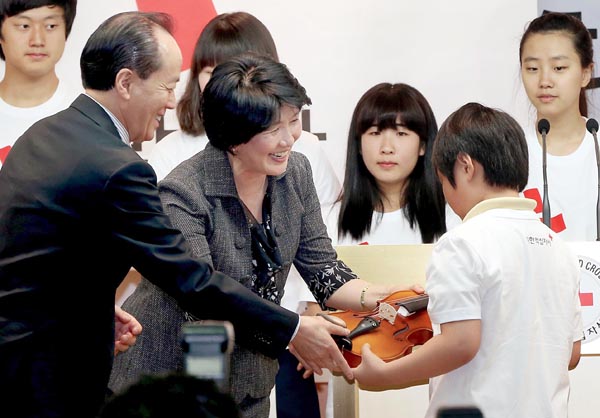 
At the age of 10, a North Korean girl lost her father and fled to China to survive. She worked in factories with total strangers, and her only comfort came from music. “I liked listening to Korean ballads and foreign pop songs,” said the young woman, who goes under the pseudonym of Kim Mi-yeon. She dreamed of one day playing an instrument.

After defecting to South Korea in April 2011, Kim will finally have her dream come true. Now 20 years old, Kim is part of the Hope Windmill Orchestra, consisting of 76 defectors between the ages of 11 and 21. She plays violin.

On Thursday, the Korean Red Cross started the orchestra, modeled on the “El Sistema” program in Venezuela, which gives opportunities to children of lower-income families.

SeAH Steel Corp. sponsored the orchestra with around 100 million won ($87,000) worth of instruments including violins, cellos, trumpets and double basses.

“Before I got this opportunity, I always envied one of my classmates for getting violin lessons,” said Lee Ji-hun, 12, who came to Korea in 2009. “I think I’ll really enjoy learning the violin because of its bright sound.”

“Music touches everyone’s heart,” said Keum, who will be in charge of the orchestra. “I truly hope it will cure some of the children’s damaged feelings and provide them hope for their futures in this country,”

Also on Thursday, the Korean Red Cross held a launch ceremony for its Hope Windmill Campaign, which will support four minority groups in Korea: defectors, children, senior citizens and multiethnic families. The campaign will provide for basic needs such as clothing, housing and education for those groups.

The campaign’s consulting system, in which two volunteers will act as advisors to a family of a minority group, will kick off in the near future.