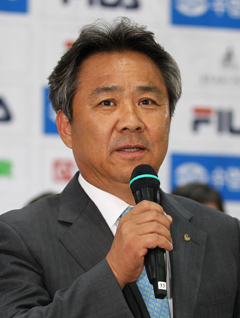 With nine days left before the opening ceremony of the London Olympics, Lee Kee-heung, the leader of Team Korea, expressed confidence in the team’s preparedness to meet its 10-10 goal at the upcoming quadrennial event.

The 10-10 goal - 10 gold medals and a top-10 finish in the gold medal count - is not overly ambitious, he said. Korea has met the goal in five of the six previous Olympics including a seventh-place finish in the 2008 Beijing Olympics with 13 golds.

The head of Korea’s athletic delegation, who is also the president of the Korea Swimming Federation, talked with the Korea JoongAng Daily yesterday, three days before he leaves with Team Korea for London.

The team, composed of 245 athletes and 129 coaching and administrative staff, will participate in 22 events at the London Games.

Q. How are preparations going?

A. They’re going well. Everything is going smoothly. We will leave for England on Friday and will ready for final preparations under various scenarios that we have set up.

London is where Korea made its first Olympic appearance in 1948. Many see the return to the English capital as an opportunity to illustrate Korea’s transformation. How will show this?

Korea is a global economic powerhouse, a G-20 member and recently joined the 20-50 Club (of countries with at least $20,000 income per capita and a population of 50 million).

Manifesting Korea’s sports power at the London Games will be a good way to represent the country’s dynamism that has made it all possible.

Is a strong start necessary to reach the 10-10 goal?

It really is. The next day of the opening ceremony, we will see the finals of the men’s 400-meter swimming, fencing, archery’s group competition and shooting.

Many of our gold medal hopes hinge on the day. As the president of the Korea Swimming Federation, I hope that Park Tae-hwan [Korean gold medalist swimmer in the Beijing Olympics] will live up to our expectations.

There has been criticism that Korea is too dependent on “elitist” sports, focusing its resources on results in global competition as opposed to developing athletics among the public.

I think elitist sports and mass sports are supplementary. If Korea’s elitist athletes do well on global stages, it helps the respective sports gain a foothold in Korea.