Home away from home in Asia

Home away from home in Asia 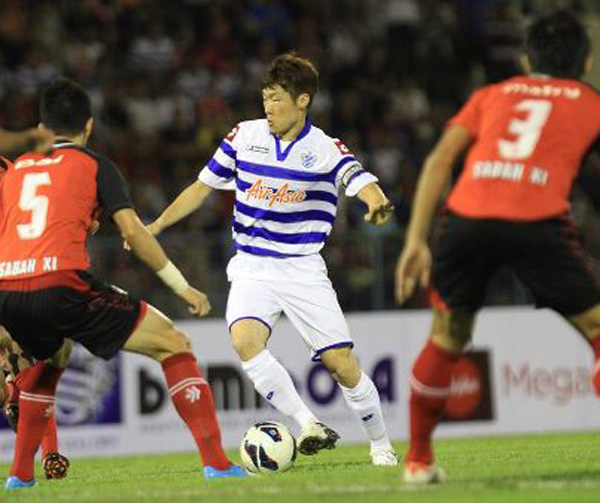 Korean Premier Leaguer Park Ji-sung, center, plays during his debut match with his new team QPR, which took on Sabah Selection XI in Malaysia on Tuesday, as part of the English club’s Asian tour. QPR won the game 5-0. Provided by QPR


A glut of Premier League sides including Arsenal, Manchester City and Manchester United are touring Asia this month hoping to cash in on the region’s unquenchable thirst for English football.

QPR and Sunderland are also heading East, meaning a quarter of the Premier League will build up to the new season by jetting off to countries on the other side of the globe and where the searing heat can be punishing.

The clubs will not admit it, but the trips to China, Hong Kong, Indonesia, Malaysia and Korea are less about football and more about the “brand,” in a part of the world where disposable income is rising fast.

It is all a far cry from the preseasons of yesteryear, when teams would warm up for a new campaign by spending a few days at an English seaside resort.

United, dethroned by rivals City as Premier League champions last season, have set the benchmark in attracting foreign fans and claim to have 325 million supporters in Asia, with officially endorsed fan clubs across the continent.

But if it was United that set the trend, the signs are that the rest are catching up - no more so than their city neighbors, whose captain Vincent Kompany said the club had a long-term strategy.

“It’s not like we arrive and say everyone has to become City fans right now,” the Belgian international said last month on a promotional tour to Kuala Lumpur, where the Premier League holders play a Malaysian XI on July 30.

“We want to show ourselves and prove that we’re a better club and hopefully becoming the best club in the world in the next 10 years,” said the defender.

Julian Kam, chief executive of ProEvents, organizer of the Manchester City and Arsenal visits to Malaysia, said that while teams benefited from an immediate financial spin-off, such as increased sale of merchandise, they were mainly looking to build a long-term fan base in Asia.

“For the fans it’s great. It’s right on their doorstep. It only makes sense that they come here and try to consolidate their fan base,” he told AFP.

QPR, now owned by Malaysian budget-airline mogul Tony Fernandes, has firmly set its sights on boosting its profile in the Far East.

The London club swooped for Park Ji-Sung from Manchester United last week - a move skeptics said was with at least one eye on the Asian audience - and after a jaunt in Malaysia they go on to Indonesia.

Organizers there expect a sell-out for the Monday match against Persebaya Surabaya, with about half the 45,000 tickets on sale still available. That already means that the crowd will be bigger than QPR’s average home gate. The match will give QPR more exposure and it will attract more fans in Indonesia,” said Abi Hasantoso, spokesman for organizers Indonesia Premier League, adding that QPR already had a large following in the country. “It is also a golden opportunity for our players to gain experience by playing against one of the best clubs in the Premier League.”

Sunderland are off to Korea for the four-team Peace Cup from today to Sunday, but interest has been muted, with only 15,000 tickets sold so far for their clash with Seongnam. AFP