Kim gets a little help from his friend

Kim gets a little help from his friend 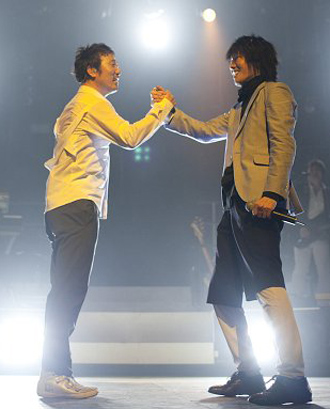 Comedienne and close friend Park Kyung-rim accompanied Lee, who is said to be ecstatic over taking part in Kim’s concert.

“I believe that all the proceeds will go toward helping the needy. But regardless, I’m just happy to help out and support a fellow musician,” said Lee.

Kim, who also will perform in New York, made headlines ahead of the performances for vowing to donate proceeds to helping the needy.

Kim touched down a few days ahead of his show and on Wednesday, made his fans back home laugh by using his Me2Day account to report that nobody showed up for an impromptu fan meet.

Last year, Lee performed in the United States, Canada, Australia, Japan and Korea on his “Sunset Glow” tour. This year, due to requests from fans, the 53-year-old crooner has scheduled concerts in 11 cities throughout Korea.