17-year-old the one to watch at Evian Masters

17-year-old the one to watch at Evian Masters 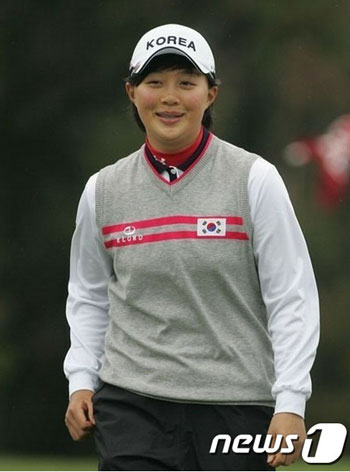 Fresh off Choi Na-yeon’s U.S. Women’s Open victory, the Seoul Sisters will look to continue making their presence felt in international golf when the LPGA returns from a two-week rest with the Evian Masters.

A total of 36 Korean nationals and Korean-descent players will compete in the French event that kicks off its four-day run in Evian-les-Bains tomorrow. The list includes Kim Hyo-joo, a 17-year-old amateur who hopes to surprise world-class professionals.

Nine of the world’s top 10 players, including three Koreans, have confirmed playing the Evian Masters, which is tied for the biggest purse on the LPGA Tour with the U.S. Open. But local pundits have said Kim is so talented that the rising star will be the player to watch.

Although she is relatively unknown in Western countries, Kim is arguably the most promising amateur in Korea and Japan.

In April, the sophomore at Seoul-based Daewon Foreign Language High School became the first amateur in nearly two years to win a KLPGA event. She carded a 16-under 272 at the Lotte Mart Ladies Open on Jeju, nine shots in front of second place Moon Hyun-hee, a 29-year-old professional.

Two months later, she won the Suntory Ladies Open in Japan, becoming the youngest to win the JLPGA event. She had 33 days before her 17th birthday when she won the event. On the final day, she made 11 birdies and no bogeys, another event record.

With 15 amateur wins since last year, she was referred to by SBS as a “monster amateur golfer” who could become iconic in the next generation of Korean golfers.

The Gangwon native has received offers to play with a JLPGA membership, but she recently decided to turn professional in Korea due in part to her “loyalty” to her country. Kim has played as a member of the Korea national team since 2010 and plans to represent Korea one last time at the World Golf Amateur Team Championship in Turkey in September.

The decision to play in Korea, however, could be reversed before she turns professional. A two-year compulsory play on the KLPGA Tour will be considered too much of a sacrifice if her potential is recognized by the LPGA.

“If she wins the Evian, she will seriously consider playing on the LPGA Tour,” Kim’s agents told reporters recently.

Recognizing her commercial value, several major Korean companies are already trying to win sponsorships when she turns professional. Some say Kim could be the most expensive player in the history of Korean women’s golf. She could surpass Pak Se-ri’s 2 billion won ($1.7 million) annual sponsorship fee that the legendary player with 25 LPGA wins received from CJ for five years through 2007.

The Evian Masters will be promoted as the fifth LPGA major beginning next year. Shin Ji-yai won the event in 2010.