Ichiro Suzuki traded to the Yankees

Ichiro Suzuki traded to the Yankees 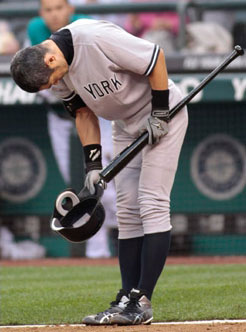 SEATTLE - Ichiro Suzuki bowed twice to the fans and promptly smacked a single to center.

Suzuki switched teams at Safeco Field after a momentous trade and singled his first time up with New York during its 4-1 victory over the Mariners on Monday night.

“Obviously, it looks different being over here,’’ Suzuki said through a translator. “I was worried about my first at-bat. I was really relieved with the standing ovation. It was a special day today.’’

In a surprising deal about three and a half hours before the game, Seattle sent Suzuki to the Yankees for a pair of young pitchers. After leaving the only major league team he’d ever played for, the 10-time All-Star held an emotional news conference and then joined his new teammates in the other clubhouse.

Just like that, Suzuki went from last place in the AL West to first in the AL East. And he helped New York beat his former club by going 1 for 4 with his 16th stolen base.

The crowd of 29,911 gave Suzuki a 45-second standing ovation when he came to bat for the first time in the third inning. He doffed his helmet and bowed twice before hitting a single and stealing second base.

“My 11 and a half years here is a long time and I was thinking what I would feel like in my first at-bat,’’ Suzuki said. “I really didn’t think anything. Nothing came to me. It was just a wonderful day to experience that.’’

Suzuki, in the final year of his contract, started in right field in place of injured Nick Swisher and batted eighth. It was the first time the 2001 AL MVP and Rookie of the Year started a game batting anywhere other than the top three spots in the lineup.

Suzuki said he did feel relaxed among his new teammates.