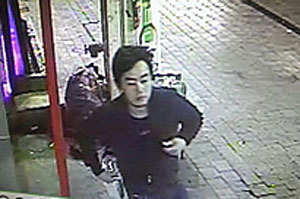 A 27-year-old man is wanted for climbing into his ex-girlfriend’s Ulsan apartment, fatally stabbing her younger sister by mistake, and then returning to the scene 10 minutes later to fatally stab his ex 12 times.

Friends of the suspect and the girlfriend who jilted him last week have been circulating the suspect’s pictures on social media networks like Twitter.

Ulsan Jungbu Police Precinct have started a manhunt for Kim Hong-il, a 27-year-old company worker. Police say Kim scaled the exterior gas pipe of a house in Jung District, Ulsan, at 3 a.m. Friday and entered the two-room apartment of his former girlfriend. With a 12-centimeter (4.7-inch) knife, Kim fatally stabbed a sleeping 23-year-old woman, identified by the surname Park, twice in her neck.

His victim was his former girlfriend’s younger sister. The older sister discovered her younger sister’s body and called 119 to report the attack. Immediately after she finished the call, the assailant re-entered the apartment through the balcony and stabbed the older sister, who was 27, 12 times.

The police said suspect Kim had worked part-time at a restaurant owned by the victims’ parents three years ago and got to know the sisters. The 27-year-old Park apparently ended her relationship with Kim last week.

Authorities suspect Kim killed the 23-year-old sister by mistake, thinking that she was his ex-girlfriend.

The suspect was caught in CCTV footage outside the victims’ apartment carrying a knife. It was reported that the suspect used his credit card at an expressway service area en route to Busan Sunday morning. His whereabouts have not been confirmed since, the police told the JoongAng Daily. Authorities dispatched two investigation teams to the coastal city.