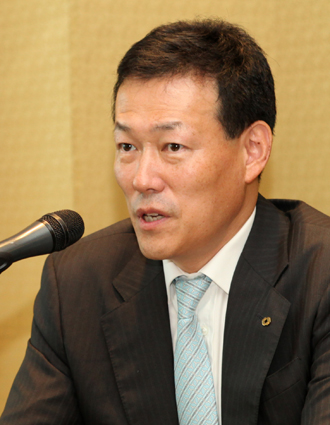 The chief of a local brokerage firm has indirectly criticized the Fair Trade Commission by claiming that its ongoing investigation into financial firms for allegedly manipulating certificate-of-deposit (CD) rates could hurt the credibility of the sector as a whole.

Kim said the local CD market is relatively young and in a transitional phase of development, so it is not fair to compare it to those of other developed countries in the West, or draw undue parallels with the London interbank offered rate (Libor) scandal in the U.K. and United States.

To find a new source of revenue, he said KDB Daewoo will accelerate its moves to expand globally as the local market is saturated with 60 investment firms, putting domestic competition at an all-time high.

“KDB Daewoo Securities now earns 4 percent of its revenue from overseas, but we aim to raise the figure to 10 percent by 2015,” Kim said. “We will expand our traditional businesses in emerging Asian markets, including our corporate finance, trading and brokerage services, while also seeking principal and private-equity investment in association with Korea Development Bank.”

To shore up debt-ridden, low-income households, Kim said government and financial institutions need to join hands to create a social security system that can help them to pay back their mounting debts. This could be achieved by lowering commission rates and assisting with their asset management, he said, pointing to this as a new opportunity for brokerages.

Regarding the National Assembly’s move to introduce a transaction tax on derivatives, Kim said this could make the local market less competitive. “Foreign investors are able to reap profits from quick swings in the local market because we don’t have a capital gains tax,” he said. Introducing this would encourage long-term investments, he said.